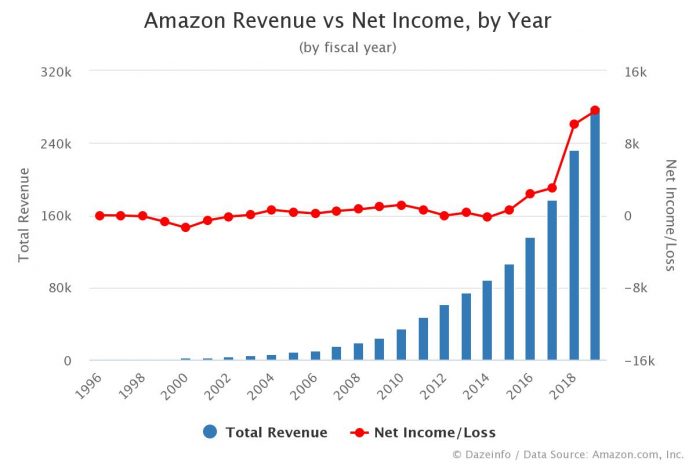 The above graph represents Amazon revenue vs net income by year, starting from fiscal 1996 to the recently completed year. The company reported its highest-ever annual revenue of $280,522 million in 2019, with a net profit of $11,588 million. That’s an impressive 20.5% YoY growth in revenue and 15% YoY growth in net profit.

It is important to note that Amazon is the fastest company ever to reach $100 billion in annual sales in just 21 years. In 2015, Amazon’s annual revenue increased a notable 20.2% YoY to reach $107 billion, globally, breaking through the $100-billion barrier for the first time in its history.

On the other hand, the year 2010 was the first time when Amazon’s net income crossed the $1 billion mark. However, after that, it had started declining until 2016 when the company once again achieved another milestone of hitting the $2 billion mark in its net income.

In fiscal 2003, the investors finally took a sigh of relief when the company reported its first profitable year, with a net profit of $35 million.