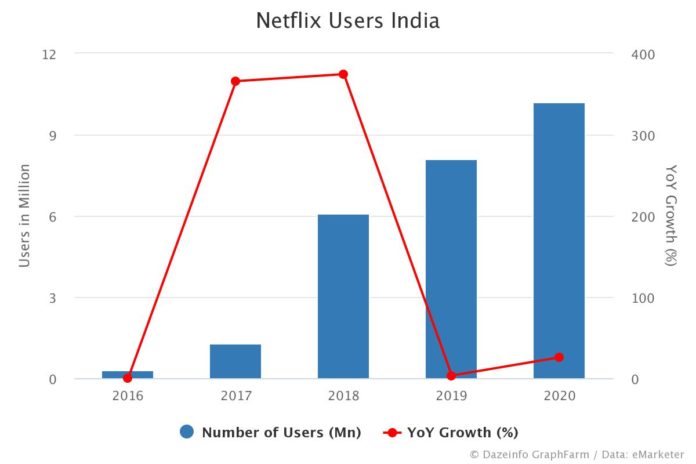 The above graph represents the growth in Netflix users in India, starting from 2016 to 2020. The total number of Netflix users in India is estimated to reach 26.6 million users by the end of 2020, showing a 111.7% YoY growth. However, the eMarketer estimates a sudden decline in the growth of Netflix India users starting from 2021. In spite of exploded adoption of high-speed internet connectivity and the increasing number of smartphone users in India, the Netflix’s India growth story is no better than a disappointment. As the OTT platform will add only 6.8 million new users between 2020 and 2021, the growth of Netflix in India is far from expectations.

Growth in Netflix Users in India

Netflix debuted in India market in 2016. After clocking astounding growth of over 300% in its user base during the first two years, the leading Video streaming player is struggling to gain grounds in India – the second-largest country by the number of internet and smartphone users.

In a market like India, which is widely popular for its price-sensitivity, pricing strategy plays a vital role in the growth of any company. Netflix’s subscription in India starts from Rs 6,000 per year that allows subscribers to stream Netflix content only on a single screen. To have multiple screen subscription India consumers have to pay little over Rs 9,000 per year – which, definitely, is a considerable amount for Indian content consumers.

The unavailability and frequency of regional and localised content is another pain point of Netflix in India. Like the US, the company has opted to stay focused on English content largely. However, in a country where the influence and adoption of regional language and localisation play an important role in the success of any business Netflix’s content strategy has not been lucrative enough so far. Only a small fraction of video content viewers are hooked with Netflix for the consumption of content that is primarily licensed or created for the US market.