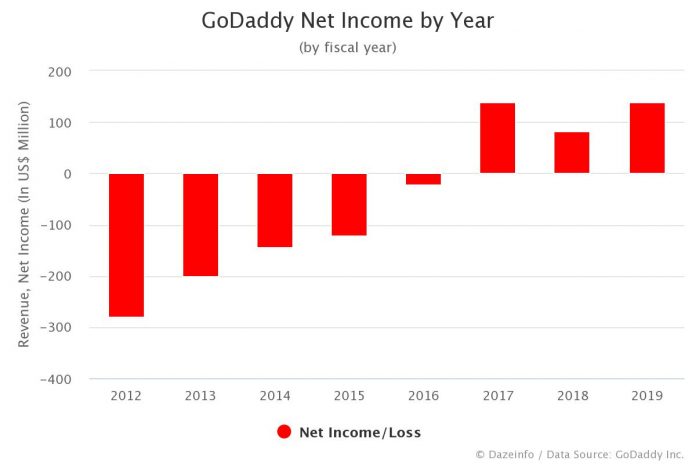 The above graph represents the GoDaddy net income by year, starting from fiscal 2012 to the recently completed year. GoDaddy net profit increased a whopping 68.8% YoY in 2019, to $138.4 million, globally.

Surprisingly, in 2018, GoDaddy’s annual net income declined to just $82 million, from a record-high of $139.8 million in 2017. This was despite the fact that 2018 was the only year in history of GoDaddy when all four quarters were profitable.

GoDaddy reported its first-ever profitable year in 2017, bringing in $139.8 million in net income – highest-ever till date. This was despite losing nearly $3.1 million in the first quarter. Interestingly, over 67.8% of the company’s total net income in 2017 ($94.8 million) was generated in the fourth quarter alone.

The annual net losses of GoDaddy have gone up by more than 5X to $279.1 million during fiscal 2012, from $53.6 million reported in the previous financial year.

However, after FY12, the company’s net losses had declined gradually with each passing year. In FY16, the total net loss of GoDaddy declined to just $21.9 million, from a whopping $120.4 million in FY15.

GoDaddy Inc. (NYSE: GDDY) is the world’s one of the largest internet domain name registrar and web hosting company. In 1997, Bob Parsons formed a company named “Jomax Technologies”, which later became GoDaddy. On May 28, 2014, the company was incorporated in Delaware.

In 2005, GoDaddy became the largest ICANN-Accredited registrar on the Internet.

In January 2009, GoDaddy began offering .IN domain names to small businesses in India. While in June 2012, the company launched its full-scale operations in India which soon became the company’s largest international office.

In July 2011, GoDaddy Group Inc agreed to be bought by a private equity consortium led by KKR, Silver Lake, and Technology Crossover Ventures, for about $2.25 billion.