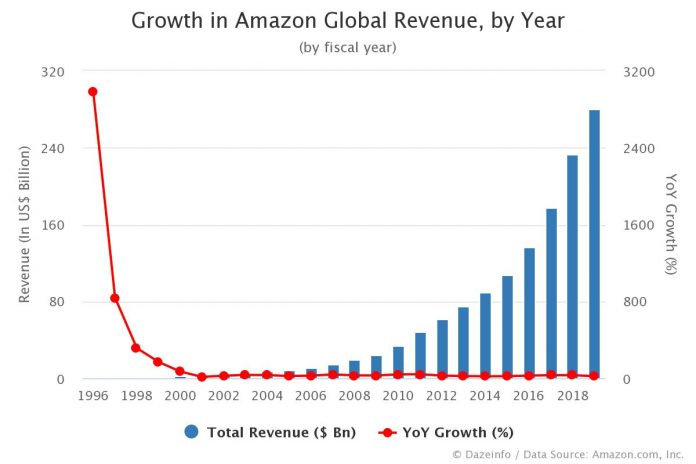 The above graph represents the growth in Amazon revenue by year, starting from fiscal 1996 to the recently completed year. The Washington based retail company reported 20.5% YoY growth in its annual revenue, amounting to $280.5 billion ($280,522 million to be precise), globally. A majority of that came from the North America.

The Washington-based retail giant achieved its first $1-billion revenue milestone in December 1999. The company recorded a whopping 168.9% YoY growth in its annual revenue, increased from 0.6 billion in 1998 to $1.6 billion in 1999.

Amazon took 7 years to achieve another revenue milestone; the annual revenue surpassed $10-billion mark for the first time in 2006, with a considerable 26% YoY growth.

December 2012 was the first time when Amazon posted over $50-billion in annual revenue, globally. A massive $61.1 billion in revenue was generated in 2012, compared to $ $48 billion in the previous year. Interestingly, the fourth quarter alone accounted for nearly 35% of the company’s total revenue in 2012.

It is important to note that Amazon is the fastest company ever to reach $100 billion in annual sales in just 21 years. In 2015, Amazon’s annual revenue increased a notable 20.2% YoY to reach $107 billion, globally, breaking through the $100 billion barrier for the first time in its history. This proves the e-commerce giant has always been witnessing significant year-over-year growth in its annual revenue, by each passing year.