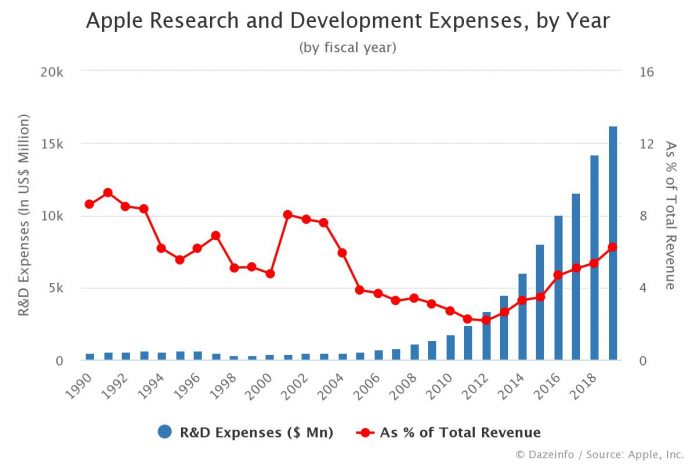 The above graph represents Apple R&D expenses by year, and the percentage of total revenue the company spends on R&D. The company’s spending on research and development activities has been increasing by each passing year. In fiscal 2019, Apple spent nearly 6.2% of its total annual revenue on R&D activities, amounting to $16,217 million – the highest-ever till date. That’s an impressive 13.9% YoY increase from FY 2018 when Apple research and development spending clocked $14,236 million worldwide. The growth in 2019 R&D spending was primarily driven by the increased headcount-related expenses, infrastructure-related costs and material costs to support expanded R&D activities.

In fiscal 1992, the Cupertino giant spent about $602 million on research and development activities – that’s accounted for 8.5% of its total revenue. One must note that it was the highest-ever share of revenue the company spent on R&D in its history.

Fiscal 2008 was the first time when Apple’s research and development expenditures surpassed the $1-billion milestone. The company’s investment in research and development increased from just $782 million in fiscal 2007 to a whopping $1.1 billion in fiscal 2008, representing 41.8% YoY growth. This was the highest-ever year-over-year growth recorded in Apple R&D expenses in history.

On the other hand, in fiscal 1998, Apple reported a huge 37.5% YoY decline in its research and development expenditures, which totalled $303 million – the lowest in the history of Apple.

It is important to note that in fiscal 2016, Apple’s total yearly spending on research and development operations totalled over $10-billion for the first time. During Oct-Sep 2016, the Cupertino giant spent nearly $1.978 billion more amount than the previous year.