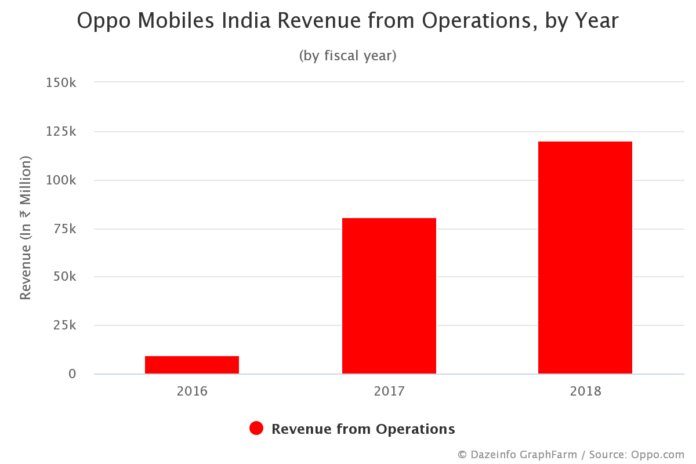 Despite recording massive year-over-year growth in its annual revenue, the net loss of Oppo Mobiles India increased to Rs 3,578.11 million in FY 2018.

The company generates its operating revenue from the sale of mobile handsets, accessories and spare parts, the sale of marketing and other materials, and the High seas sale of components of mobile phones.

When it comes to the sales of smartphones, Oppo shipped nearly 3.6 million units of devices in Q2 2019, capturing nearly 8% share of India’s smartphone market.

In fiscal 2016, Oppo Mobiles India generated Rs 9,337.48 million in revenue from its operations.

Oppo Mobiles India Private Limited was incorporated on 23rd November 2013, and its headquarter is in Gurgaon, Haryana. The company is primarily engaged in manufacturing and trading of mobile phones, storage devices, and other wireless telecommunication devices.

As of June 2019, Oppo is the 5th largest smartphone brand in India, with 8% market share.