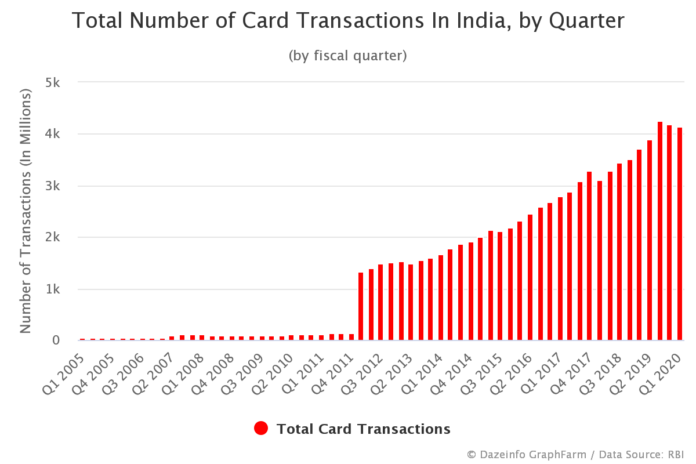 Similarly, during Q3 2017, the usage of cards (both credit and debit cards) at POS and ATMs increased in the country. The total card transactions increased an impressive 19% YoY in volume, to 3,090.67 million.

Note: RBI started releasing the data for Credit and Debit cards usage at ATMs from April 2011 (fiscal Q1 2012). Before that, the total number of Credit/Debit card transactions includes only Credit/Debit usages at POS, not usage at ATMs. That’s the reason an astonishing 821.9% QoQ growth can be seen in the total number of card transactions in India – increased from just 133.29 million in Q4 2011 to 1338.76 million in Q1 2012.

Digital transactions save time and money, resulting in a better bottom line. Customer experiences are also enhanced (think of the convenience of eSigning versus having to print a contract, sign it, and then return it by mail or fax). And digital transactions improve tracking capabilities, which helps reduce errors.

The exploded adoption of smartphones, mobile apps and mobile internet has helped Digital transaction industry to grow at an unprecedented rate. With more than 500 million smartphone users, India is one of the largest countries by the number of digital transactions that are recorded every month.