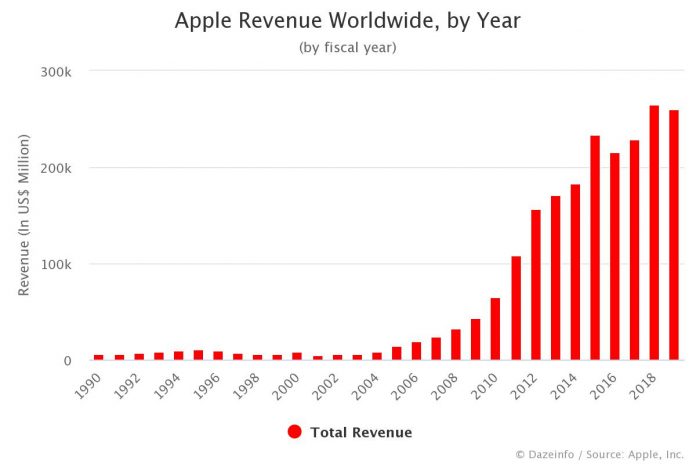 The above graph represents the worldwide Apple revenue by year, starting from fiscal 1990 to 2019. In fiscal 2018, Apple posted its highest-ever annual revenue of $265,595 million, globally, with an impressive 16% YoY growth. The growth was led by the first quarter when Apple’s quarterly revenue clocked about $88,293 million. However, Apple’s global revenue in fiscal 2019 declined nearly 2% YoY, to $260,174 million.

It is important to note that Apple generates a majority of its revenue and earnings from its international operations. In fiscal 1993, the company posted annual revenue of $7,977 million (~ 8 billion), with a year-over-year increase of 12.6%. After two years, in fiscal 1995, the company achieved $10 billion annual revenue milestone for the first time. However, after that, the annual revenue started declining till fiscal 2005 when it again crossed $10 billion mark. Apple generated $13,931 million ($13.9 billion) in fiscal 2005, registering 68% YoY growth.