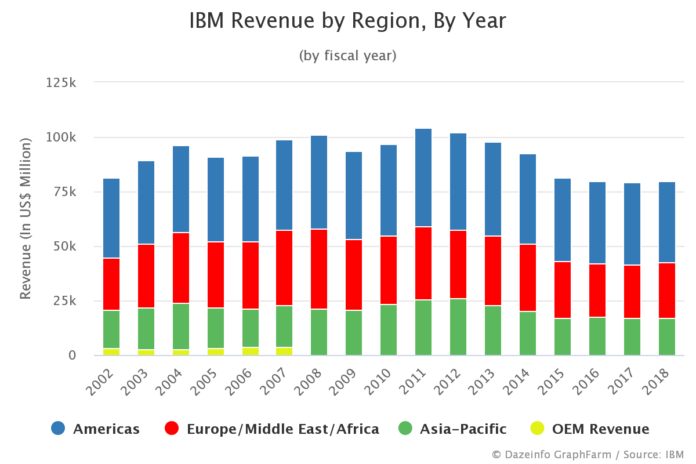 The above graph represents IBM annual revenue by region. In FY 2019, the company reported 3.1% YoY growth in its annual revenue, amounting to $77,147 million, worldwide. Interestingly, over 46% of the company’s total revenue came from America region alone.

On the other hand, nearly one-third of the company total revenue ($25,491 million) came from Europe/Middle East/Africa region in 2018. The total revenue of IBM from EMEA in 2018 increased a significantly, 4.5%, YoY (1% adjusted for currency). As per the company’s annual report 2018, IBM revenue from Germany and the UK increased a significant 8.0% YoY and 6.2% YoY, respectively. IBM’s revenue from Spain, France and Italy have also increased a notable 15.4%, 3.4% and 4% YoY, respectively.

Surprisingly, the year-over-year growth in IBM’s revenue in 2018 from the Asia Pacific region was flat (0.02%). IBM reported that IBM reported a marginal increase in revenue from Japan, while Australia grew 2.0% YoY. Surprisingly, IBM revenue from India and China, both have increased a notable 10.1% and 7.8% YoY, respectively.

It was 2011 when IBM revenue peaked to $106.9 billion, globally, the highest ever in the history of the company. Of that, a whopping $44.9 billion came from Americas.

Similarly, about $37 billion was the maximum revenue IBM has ever generated from the EMEA region in 2008. The region accounted for nearly 35% of the company’s total revenue. Since then it has constantly been declining.

In 1911, IBM was founded by Thomas J. Watson at Endicott, New York, as the Computing-Tabulating-Recording Company (CTR) and later in 1924, it was renamed “International Business Machines” (IBM). As a globally integrated enterprise, the company currently operates in more than 175 countries. As of 2018, the number of employees in IBM/wholly owned subsidiaries crossed 350,000.