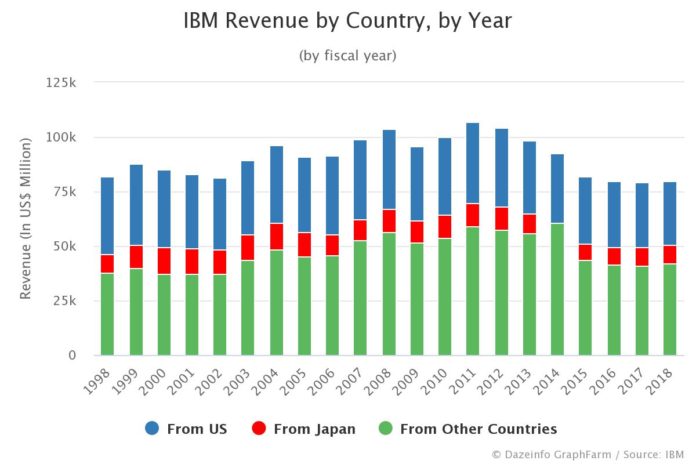 The above graph represents IBM annual revenue by country. In 2018, IBM posted total revenue of $79.59 billion, globally, with a negligible increase of 0.6% compared to the prior year. Interestingly, IBM’s US revenue accounted for nearly 36.5% of the company’s total revenue in 2018.

In 2004, IBM’s revenue from Japan hit an all-time high of $12.3 billion, with a notable 5.12% YoY growth. Since then it has been either declining or stagnant.

Note: Revenues are attributed to countries based on the location of the client.

In 1911, IBM was founded by Thomas J. Watson at Endicott, New York, as the Computing-Tabulating-Recording Company (CTR) and later in 1924, it was renamed “International Business Machines” (IBM). As a globally integrated enterprise, the company currently operates in more than 175 countries. As of 2018, the number of employees in IBM/wholly owned subsidiaries crossed 350,000.