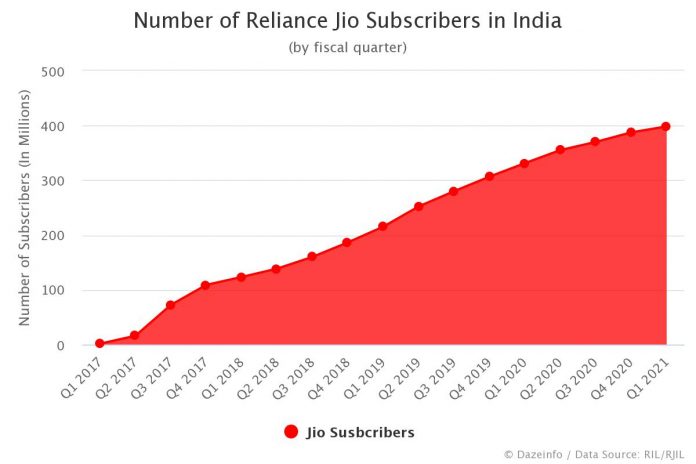 With 33.85% market share, Reliance Jio is the largest wireless telecom provider in India as of April 2020, followed by Bharti Airtel.

It is important to note that Reliance Jio continues to remain the world’s fastest-growing digital service company, with subscriber base crossed the 340 million mark in August 2019. Jio is also emerged as India’s largest telecom enterprise in terms of subscribers, revenues and profits.

With each passing quarter, Reliance Jio is adding about 30-35 million new subscribers to its total user base, constantly challenging the dominance of Airtel and Vodafone (Now Vodafone Idea).

The unparalleled growth of Jio is largely driven by the jaw-dropping mobile tariffs, which has redefined the mobile telecom industry in India. Taking the consumer-first approach, Reliance Jio offers unlimited calls to customers, albeit restricting high-speed data usage.

During its first fiscal quarter of 2016-17 (ended on June 2016), Reliance Jio had roped in 1.5 million subscribers in its test phase which offered free calls and data. Surprisingly, in just 3 months, net subscriber addition for the company was 14.5 million, making the total number of Reliance Jio subscribers in India to 16 million.