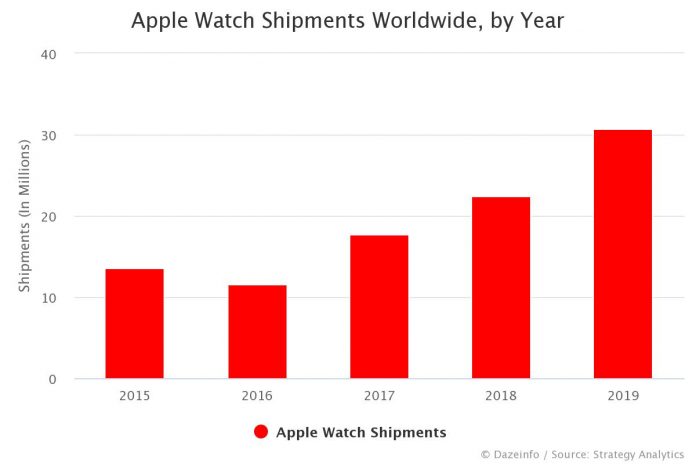 The above graph represents Apple Watch shipments worldwide by year, starting from 2014 to 2019. With over 50% shipment share, Apple is currently dominating the global smartwatch market. Surprisingly, in 2019, the Apple Watch outsold the entire Swiss watch industry by a huge margin, as per Strategy Analytics report. Apple Watch shipments grew from 22.5 million units in 2018 to 30.7 million units in 2019, showing a healthy 36% YoY growth. A blend of attractive design, user-friendly tech and sticky apps make Apple Watches wildly popular in North America, Western Europe as well as in Asia.

After receiving a lukewarm response from the market in 2016, Apple bounced back with the new Apple Watch Series 3 in 2017, which helped the company to post approximately 53% YoY growth in shipments, worldwide.

Apple Watch shipments increased further in 2018 despite the increasing competition from established players, such as Samsung and Fitbit. In 2018, the shipments of Apple Watches surpassed 20 million for the first time. The Cupertino giant shipped 22.5 million units, recording nearly 27% YoY growth. The shipment growth was primarily driven by the strong demand of Apple Watch Series 3 and Apple Watch series 4.

The first edition of Apple Watch was released on April 24, 2015. And surprisingly, within 2 months of its launch, 3.6 million units were sold, globally.