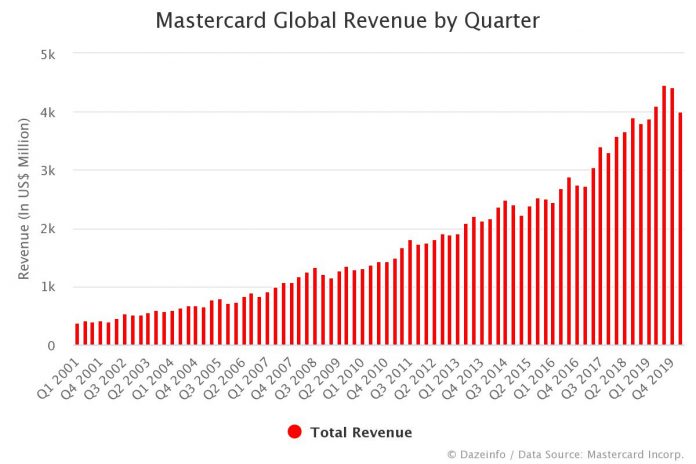 The above graph represents the Mastercard revenue by quarter, starting from fiscal Q1 2001 to the recently completed quarter. Mastercard quarterly revenue increased nearly 3% YoY in Q1 2020, to $4,009 million, worldwide. The growth was primarily driven by the 13% YoY increase in switched transactions, 8% increase in gross dollar volume, etc. However, on a quarterly basis, the reported a notable decline of 9.2% in its Q1 2020 revenue.

The quarterly revenue of Mastercard has been steadily increasing since Q1 2001, albeit with few occasional crests and troughs. Interestingly, the company achieved its first $500 million revenue milestone in Q3 2002. The total revenue increased an appreciable 33.7% YoY in Q3 2002, to $539 million.

The company took 5 years to double its global revenue; Mastercard global revenue surpassed $1,083 million for the first time in Q3 2007, with a strong 20% YoY growth.

In 1966, the several bankcard associations joined together to form a company named “Interbank Card Association (ICA)”. After three years, in 1969, ICA started a new national brand “Master Charge: The Interbank Card”, which was renamed “MasterCard” in 1979.

Mastercard Inc. was incorporated as a Delaware corporation in May 2001.