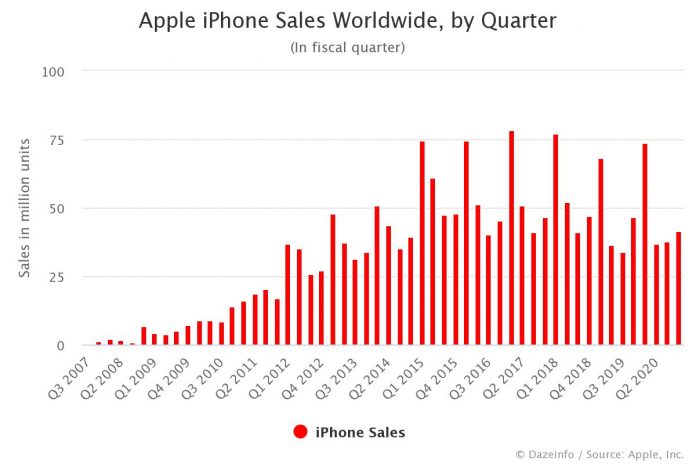 The above graph represents the worldwide Apple iPhone sales by quarter, starting from fiscal Q3 2007 to Q1 2021. Due to the declining sales of iPhones, Apple has stopped revealing the sales figure of the iPhone from the first quarter of fiscal 2019 (Oct-December 2018). However, a market research firm IDC continues to estimate the number of iPhones sold every quarter, along with other 5 top vendors’ smartphone shipments worldwide.

Apple shipped a whopping 90.1 million units of iPhones during Oct-Dec 2020, worldwide. The 22.2% YoY growth was primarily driven by huge demand for the iPhone 12 series.

The global iPhone sales declined a notable 10.6% YoY during the fiscal Q4 2020, totalling 41.6 million units. The decline in shipments was mainly due to the delay in iPhone 12 launch series. However, its iPhone 11 series iPhone SE 2020 did quite well.

The iPhone price cut in China throughout the second quarter along with favourable iPhone trade-in deals in many markets were still not enough to encourage consumers to upgrade their iPhones.

It was the fiscal Q1 2017 when the global sales of Apple iPhones reached an all-time high of 78.29 million units. That’s 4.7% YoY and a whopping 72% QoQ growth. The holiday quarter helped the company to generate its highest quarterly revenue ever. However, one thing has to be kept in mind that the December quarter being the holiday season has always been Apple’s best quarter, and so a QoQ growth rate comparison is meaningless.

The first generation of iPhone was launched in June 2007, at the price of $499 for the 4GB model and $599 for the 8 GB model. And after 10 years, in September 2017, Apple Inc. (NASDAQ:AAPL) celebrated its 10th anniversary of iPhone by launching its most-expensive, most-innovative iPhone X, along with iPhone 8 and 8 Plus.

There was unprecedented growth recorded in the worldwide sales of iPhone after the launch of iPhone 6 and its successor iPhone 6S. In fact, iPhone 6S has been the most selling iPhone model to date.

Once at the stage of near bankruptcy, the table got turned for Apple after the visionary CEO, Steve Jobs, decided to join back the company in 1997. Known for his leadership style and rigid attitude Steve Jobs took four years to turn the table back (read known facts about Steve Jobs). With the launch of iPod in 2001, Steve Jobs successfully got the eyes of the industry experts, investors and critics back on the growth of Apple.

However, it was only 2007, when Steve successfully shifted the gears with the launch first iPhone – a complete touchscreen smartphone running on iOS. After the initial hiccups, the worldwide sales of iPhone skyrocketed from fiscal Q4 2008, when Apple recorded nearly 9X jump in the sales of the iPhone.

In 2017 Apple launched iPhone X – the 10th anniversary iPhone. Despite facing strong criticism for its pricing strategy the sales of iPhone X kept increasing and became the most selling smartphone model of Q2 2018.