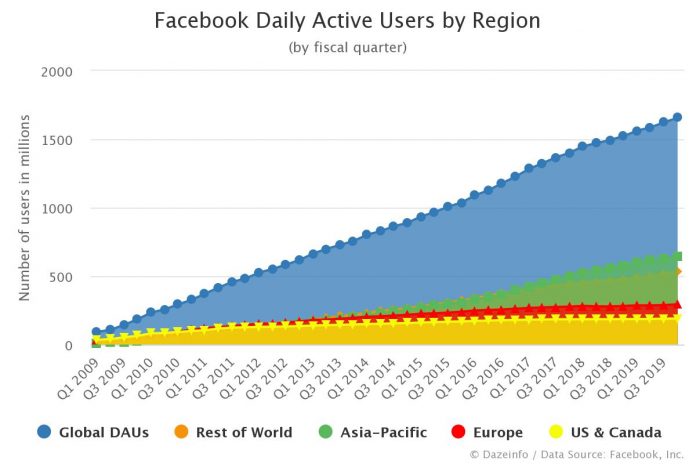 The above graph represents the number of Facebook daily active users by region, starting from Q1 2009 to Q3 2021. Overall the number of Facebook global DAUs reached an all-time high 1.66 billion in Q4 2019. That’s an increase of 8.8% YoY. Nearly 38.7% of those came from the APAC region, followed by Europe, and then US & Canada.

Surprisingly, Facebook DAUs from the US and Canada remained stagnant. Only 4 million new DAUs were added in the last one year, making the overall count to 190 million in Q4 2019.

However, Europe saw a 4.3% YoY growth in the number of Facebook DAUs, from 282 million in Q4 2019 to 294 million in Q4 2019. On a quarterly basis, the company added only 6 million new DAUs from Europe during the fourth quarter.

In Q3 2015, Facebook achieved a milestone of 1 billion daily active users, worldwide. About 89% of those were accessing Facebook from their mobile. The company witnessed significant YoY growth in the number of DAUs across major markets, including India, the United States, and Brazil.

Interestingly, after one year, Q1 2019 to be specific, the total count of Facebook DAUs from APAC reached 600 million, adding 100 million more people to its network.