Facebook To Fuel eCommerce War in India With B2C Offerings

The world’s largest social network is exhibiting commendable resilience after the recent fallout. Facebook is reportedly branching out in the e-commerce ecosystem. After disrupting India’s payment sector with WhatsApp, the company is in works to expand its Marketplace with business-to-consumer (B2C) offering in India. Facebook Marketplace with a consumer-to-consumer (C2C) interface, which was introduced in November last year in India, has its presence in 70 countries with 800 million visitors per month.

Facebook is in talks with several brands and businesses in India to introduce their products on its Marketplace. The online social media firm is also building tools for them to make the process of uploading products and managing inventory and orders. A soft launch is expected in June this year and payments will be enabled by the end of this year, according to the people familiar with the matter.

According to ET, the company confirmed that it is testing ways to feature content from retail stores and shops to its Marketplace. A company’s spokeswoman says, “We first introduced Marketplace in India last November, and since then we’ve been continuously learning and evolving the experience to meet people’s needs. We’ll continue to explore new ways to help these communities connect through commerce.” 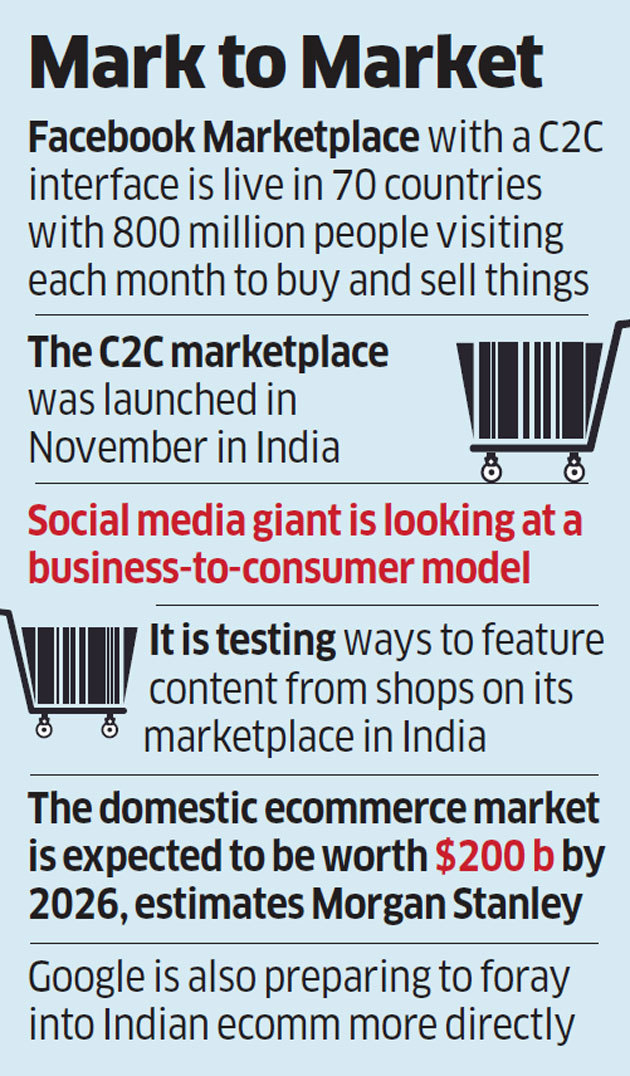 A Social Media Company Getting Into E-Commerce?

The e-commerce revolution in India is here to stay as numerous startups continue to join the race. Facebook, with its C2C offering, was competing with players like OLX and Quikr only to receive a lukewarm response to its efforts. Though entering into the B2C interface will herald the company’s marketplace into a bigger frame, but here it has to face big fishes who continue to dominate the online retail space. Top notch e-tailers like Amazon and Flipkart are already showing impressive growth in the country and Facebook’s B2C strategy is likely to be a potential threat to them.

India’s online retail market recorded sales worth $17.8 billion in 2017 and the sector is expected to grow to $60 billion by the end of 2020, estimates IBEF. E-commerce players are rapidly evolving in India as brands and businesses are betting on the massive growth potential of the sector especially in emerging markets. The fast increasing disposable personal income of India has created immense opportunities for E-commerce startups.

Social platforms like Instagram and Pinterest have already been pushing themselves into this lucrative marketplace. Facebook revamped its Messenger platform to accommodate various merchants and consumers. The tech firm has been working with AR tools with Nike, ASUS and Kia, allowing retailers to display and demo their products in Messenger.

Facebook can absolutely cash in on this B2C opportunity with the help of its strong 2.2 billion monthly active user base. Being a social network, the interface of Facebook’s new marketplace won’t necessarily follow the conventional style and apparently give a new face to online marketplaces. Shopping and socializing simultaneously from a single platform doesn’t look like a bad idea! Facebook Marketplace could eventually lead to a new and more personalized e-commerce experience.

Yet there is a caveat. A social media platform as an online marketplace won’t compute so good with sellers, at least initially. For India, industry experts believe that it could take some time for sellers to get familiar with a social media-cum-E-commerce platform. Also, the competition from incumbent giants like Amazon and country’s very own poster boy of E-commerce Flipkart who are eventually fighting for the same customers can get cumbersome. But this would open an additional channel for both brands and consumers.