Apple Inc. (NASDAQ:AAPL) released its financial results for the second fiscal quarter of 2017 on May 2, 2017. Apple is one of the biggest players in the smartphone industry and accounted for nearly 92% of the smartphone industry’s profits in Q4 2016. So how well did Apple do this time? And what trends are likely to hold in the future? Let’s find out.

This quarter was not the best for Apple, both in terms of smartphone shipments and revenue. Apple reports a revenue of $52.9 billion, which is slightly lower than Thomson Reuters consensus estimation of $53.02 billion. Nevertheless, revenue was up from the $50.6 billion during the same period last year. However, the deficit in smartphone shipments is much greater. Apple shipped 50.8 million smartphones during this period, lagging behind the 52 million estimated by FactSet, and the 51.12 million shipments made same time last year. 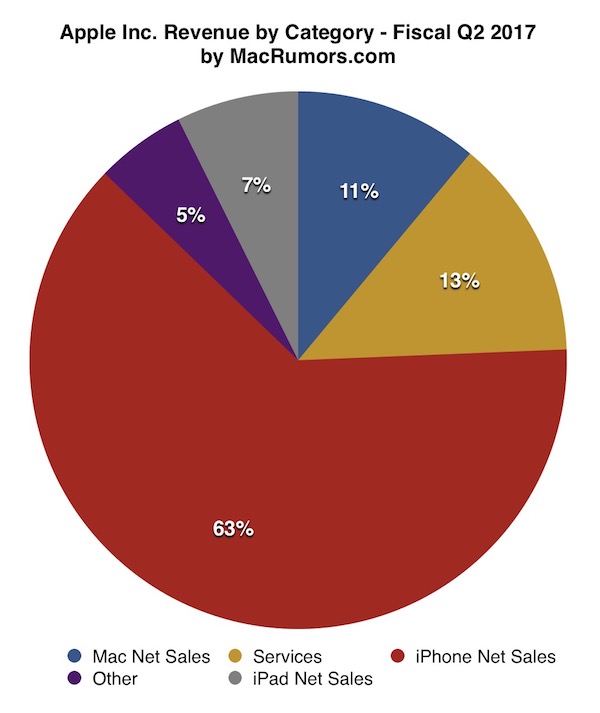 Once again, it was the iPhone which was the biggest growth driver for Apple this fiscal quarter. The 50.8 million iPhones that Apple sold accounted for nearly 63% of Apple’s revenue.

The second biggest revenue share was claimed by Apple’s fledgeling services business, which experienced 18% YoY growth. With 13% of the revenue share, this was Apple’s highest services revenue ever for a 13-week quarter. Growth in this segment can be attributed to the successful reception of Apple Music. This is good news for Apple who has been looking to expand their services business.

There have even been reports of a possible buyout of Disney to expand their service business.

Sales of Macs also showed significant improvement as Apple sold 4.12 million units of Macs with a combined revenue of $5.84 billion. This represents a growth of 4% in shipments and 14% in revenue compared to the same time last year when Apple shipped 4.03 million units and had $5.12 billion in revenue. This can be attributed in large part to the release of the revamped MacBook Pro line in October of 2016.

The rest of Apple’s revenue was made up by the Apple Watch, Airpods and Beats products. These products combined to make up $2.87 billion in revenue, up from $2.19 billion same time last year.

Forecasts For the Future

Apple has also made some forecasts for their upcoming third fiscal quarter:-