In the era of smartphone and technology, mobile security is a big issue. Recent Wikileaks claims of the C.I.A. hacking smartphones have once again brought the issue of mobile security to the forefront. In a time when smartphones are completely integral to our everyday activities, bad security habits can leave us vulnerable to all manner of trouble. However, a recent report by Pew Research Center reveals some worrying issues.

According to the report, nearly 28% of smartphone users do not use a lock screen on their phones. This is the most basic form of security that should be used by everyone. Moreover, 40% of users only update their apps or operating system as per convenience, and some never update their apps (10%) or operating system (14%). This is highly inadvisable since regular updates help shore up security vulnerabilities and other issues.

As one would expect, elderly users are more prone to poor security habits. Users above the age of 65 are much less likely than users below 65 to use a screen lock and regularly update their apps and operating system (13% vs. 23%). They are also more than twice as likely to say that they do not take any actions to secure their phones (8% vs. 3%).

The result of this callous attitude towards mobile security is pretty clear. According to Pew Internet, 64% of Americans have been impacted by a data breach of some kind, with fraudulent credit card charges (41%) and leak of sensitive information (35%) being the most common.

The Need For Better Mobile Security

We are in the midst of a digital upheaval. The behavioural patterns of people are changing when it comes to how they conduct their digital tasks and activities. As we gravitate more and more towards a mobile-first digital ecosystem, we open ourselves to new threats. Some of the biggest reasons outlining the need for mobile security are:

1. Adoption Of The Mobile First Ecosystem – Gradually mobiles are replacing desktop computers for many of our everyday digital activities. As smartphones have become more and more advanced, they are becoming capable of performing tasks that were previously only possible on desktop computers.

According to a report by Pew Research Center, the most popular usage for smartphones in the US were for healthcare information (62%), online banking (57%), real estate listings (44%), job information (43%), government services information (40%), education (30%) and job applications (18%). Many corporate environments are also increasingly using smartphones to conduct their business. Security Softwares such as Antivirus, Firewalls, encryption have been a staple of desktop use for a while now. However, security options and practices on the mobile platform are not nearly as robust. This has made an increasingly large population of the world susceptible to hacking, phishing and other malicious digital attacks. 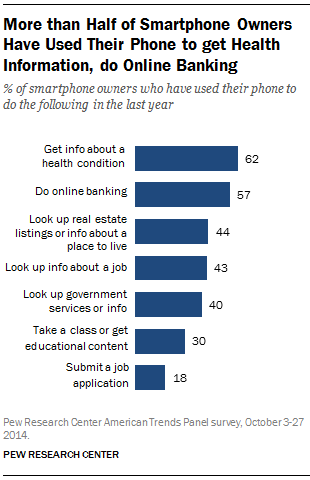 2. Expansion And Availability of Wireless networks And Public Wifi Hotspots – With advancement in wireless network technology and the spread of services such as 4G and the increasing availability of public WiFi hotspots, it has become possible to conduct a variety of jobs on our smartphones. People have started using their phones for a multitude of sensitive tasks. A survey found that 54% of internet users used public hotspots for various tasks. However, public WiFi hotspots are generally not very secure. Poor mobile security can leave us vulnerable to hacks, phishing and even identity theft.
3. Rise Of Mobile Wallet Payment Systems – One of the more headlining news in the world of smartphones has been the rise of cashless, mobile wallets over the past few years. This transaction model has immense benefits and can be essential in the creation of a truly cashless economy. However, it also means that we are literally keeping our money in our mobiles. This alone warrants the need to be mindful of security as mobiles become a rich target for hackers.
4. The Internet Of Things – The advent of “The Internet of Things” gives us an exciting glimpse into the future. More and more things are becoming internet-enabled, and subsequently controllable by our smartphones. However, poor security here can lead to some horror situations for us. This is aptly demonstrated by the recent hacking of an automated car’s control system to control braking and acceleration.

We can reduce the risk of digital attacks and keep our smartphones secure by just following some basic security habits: