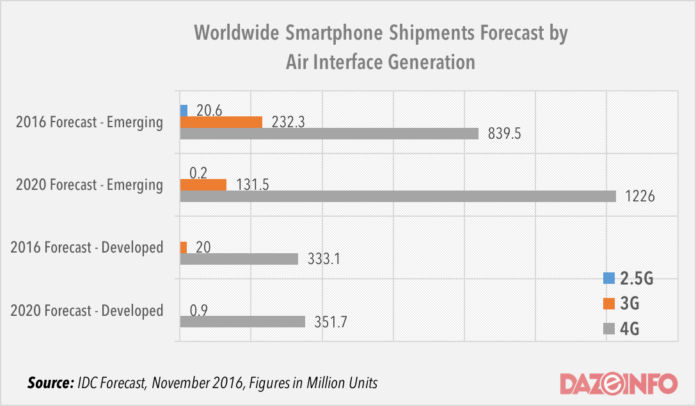 4G smartphone adoption has almost killed the 3G growth, especially in the developed countries. The shipment share of 4G smartphones is expected to grow to 92% in 2020 from 81% in 2016, according to the latest data from IDC. The market growth of 4G smartphones will be led by emerging markets (Asia/Pacific excluding Japan, Latin America, Central and Eastern Europe, and the Middle East and Africa), which will account for 71.6% of total 4G smartphone shipments by 2020.

The Growth of 4G Smartphones in Emerging Market

As we reported earlier, the worldwide smartphone shipments are expected to reach 1,445.4 million units in 2016; emerging markets accounting for 75% of this. These figures clearly portray the dominant status of emerging markets, especially India, on global smartphone forum.

With an almost negligible growth in smartphone shipments and 4G smartphones shipments, the developed markets are no more attracting smartphone manufacturers.

The trends are clearly indicating that the world has moved on from slow speed mobile internet connectivity. By 2020, a whopping 1577.7 million total 4G smartphones are expected to be shipped compared to just 132.4 million 3G smartphones.

The emerging markets are all set to drive the growth of 4G enabled smartphones in the next five years. Thus, it is but natural that manufacturers have now shifted focus to the Indian market. After all, it is the Indian market that has the maximum potential to grow in the next few years. With 331 million smartphone users in India, the smartphone penetration has reached to just 25% by the end of Q3 2016. 71% of smartphones that are being sold in the country every quarter belong to sub-$150 and most of them are 4G enabled!