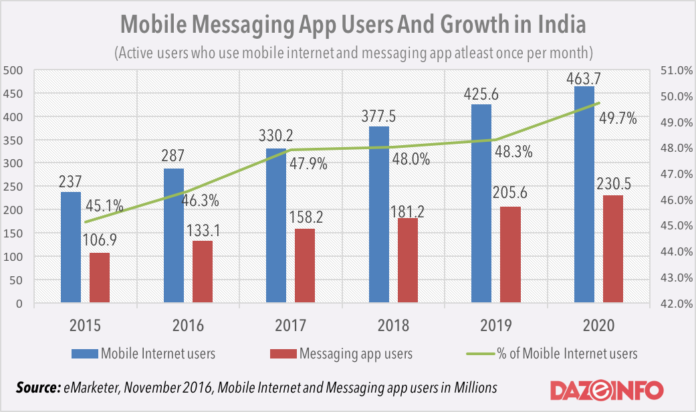 According to a new report from eMarketer, over a quarter of the world’s population is estimated to use mobile messaging apps by 2019. By the end of 2016 itself, user growth is predicted to increase by 16% reaching to almost 1.4 billion users, worldwide.

“One reason mobile messaging apps have taken off is because they are a cheaper alternative to SMS/MMS,” said Cathy Boyle, principal analyst, mobile at eMarketer.

The present generation needs instant messaging, and mobile messaging apps are the way to go! The growing popularity of messaging apps like Whatsapp, SnapChat and Facebook Messenger just goes on to prove the earlier statement.

According to Statista, among the top five social media apps ranked by the number of active users globally, four are mobile messaging apps – Whatsapp, QQ, Facebook Messenger and WeChat.

In India, the scenario is no different. WhastApp is more popular than any other social media app. According to a study published by TNS Global, 56% of internet users in India use WhatsApp compared to 28% of those who use Facebook Messenger. The figures are a bit old but the trend has not changed much.

The popularity of messaging apps isn’t surprising. Mobile phones had gained momentum solely due to the ‘messaging’ feature. So, it is evident that people will want to opt for better options that makes communication easy and instant. According to Apptentive, a research firm, this also means avoiding SMS charges and paving the way for easier communication.

Further, the report attributes this shift in trend to social media fatigue, wherein people are tired of too much social interaction and prefer private conversations with loved ones and acquaintances. It also highlights that the end-to-end user encryption security now provided by many messaging apps is also a key factor for the increasing popularity of messaging apps. Encryption means security, and also relief that only the sender and receiver can read the messages they communicate.

Nowadays messaging apps come with a lot of extra features like group videos, music, bill payments, emoticons, appointments, traffic reports and more. These add-ons are good enough to appeal users than social media apps. The best feature of all is the chat bots used for interaction. Further, messaging apps provide a good platform for businesses and marketers to reach out to their customers in an easy environment.