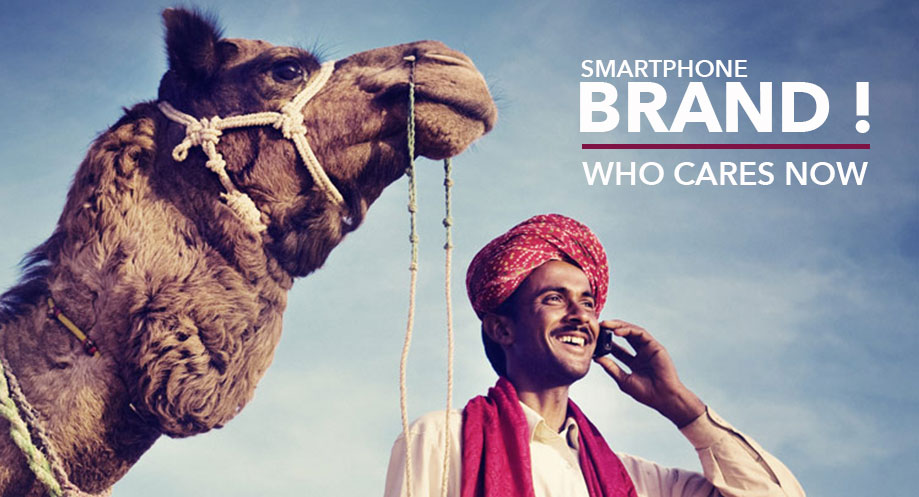 Analyzing the latest report by CMR (Cyber Media Research), one can decipher the lack of brand loyalty among the Indian smartphone users. The flourishing budget phone market offered implausible features at an average selling price of Rs. 10,700 ($160) as recorded in the year 2015. These economical smartphones are giving a stiff competition to the top league players like Apple, Samsung, Sony etc. The average selling price (ASP) of smartphones in India has considerably dropped compared to the 2013’s ASP which stood at Rs. 13,000 ($200).

The report also mentioned the growth of Indian smartphone market citing an impressive 37% increment in 2016. The growth would be largely driven by the growing adoption of entry-level or mid-range smartphone devices while the premium smartphones will have the minuscule contribution. Astonishingly, in 2015, the premium smartphone market (priced over Rs. 50,000 or $750) that includes Apple’s iPhone and Samsung Edge series accounted for a mere 0.6% of smartphone market share in India. The debacle can be attributed to the rise of the budget smartphone phone manufacturers, such as Xiaomi, CoolPad, Vivo, Oppo, in India, offering the same features akin to the premium expensive counterparts.

Optimum performance remains the priority of smartphone manufacturers to initiate consumer’s interests. With an increase of 0.53% of the devices that house 4GB of RAM being shipped in 2015 compared to the last year, one can notice the perceptive change in Indian consumer’s mind.

A recent report by Ericsson perceived an increase of 25% YoY in Mobile broadband subscriptions worldwide with an estimate of 15% CAGR till 2021. The report also notifies the rise of LTE subscriptions, predicting a whopping 45% of projected 9,100 million mobile subscriptions to use an LTE device by 2021. LTE is the major driver of the smartphone industry as an impressive 60% of the smartphone users access the internet from their mobile phones.

The rise of Budget smartphone market

Indian smartphone market is flooded with a number of new smartphones being launched every month. The majority of them target the cheaper smartphone sector. The budget smartphone manufacturers are targeting Tier 2 and Tier 3 cities, including the rural areas of India, offering them inexpensive and finest technologies at a much lower price.

One would prefer a cheaper smartphone having the same features akin to the expensive premium smartphones. That fact can be illustrated by the current sales figure of Coolpad Note 3 Lite mobile phones in India which was priced at Rs. 6999 ($103) and housed incredible features including fingerprint sensor and 3 GB of RAM. About 30,000 units of this milestone device were sold within a span of 14 seconds after its launch. But the craze is not limited to sub-$100 smartphone alone, LeEco reportedly sold 70,000 units of Le 1S smartphone, priced at Rs. 10,999 (US$165) within a span of 2 seconds yesterday in flash sales.

The maintenance of these premium golden bricks of technology is a big issue, out of which, the major issue being breaking of the touch screen. According to official Motorola 2015 survey, 50% of the people have experienced the cracked smartphone screen globally and the majority 65% of those 50% happen to be Indians. So, how many really go for replacement paying a handsome amount of money? 23% of the unlucky users use their phones despite the cracked screens, out of which 36% were Indians.

Being very expensive, repairing the broken screens was the major concern for the unfortunate users. Replacing a shattered screen of Apple iPhone 6s will cost you $149 (Rs 11,000). By shelling such a huge amount just to repair the screen is a bad bet when one can buy a cheaper smartphone housing almost all the features of an expensive smartphone.

India is a price sensitive market

India being a price sensitive market, a majority of the smartphone players are concentrating on budget smartphones rather than the expensive ones. Regarding the used phone market, India accounts a whopping 20 million used smartphones that are estimated to be sold or traded during fiscal 2016.

The premium smartphones in the range of $500 are being sold several number of times before retiring. But these numbers will soon become obsolete, due to the onset of the state of the art, cheaper LTE mobile devices in India. The point is that, why will a user buy an old smartphone if he/she is getting the same features in a newer and cheaper devices that come at an average selling price of Rs. 10,700 ($170) as of 2015.

LTE is the new driving force of smartphone industry

LTE is the major driver in the smartphone industry. According to the latest report by Ericsson, an astounding 40% of the 7,700 million projected users will use an LTE device by 2021.

With the rise of Netflix and YouTube and the fact that 50% of online videos are streamed on mobile devices, has also accounted for the rise of faster internet network. With telecom authorities making ways to incorporate 4G services in India, acknowledging the huge market potential and the rise of cheaper smartphones, we may expect a huge surge in LTE market.

Camera and LTE technology can be regarded as the primary priority for smartphone users. More focus will be on these attributes and software productivity can be increased further, with the incorporation of the major tech giants of India like Wipro, TCS, Infosys etc.

With the declining Average Selling Price in India smartphone manufacturers’ major concern will be the price, along with providing the finest features to stand against their counterparts. The new-found budget Phone market is providing a platform for new entrants like  Coolpad and LeEco to expand and develop their markets in India. All good, but end of the day it’s all about making profit, and with most of the manufacturers are forced to work on razor thin margin margins, it would be interesting to see who emerges as the clear winner of the India smartphone industry in next 2- 3 years.