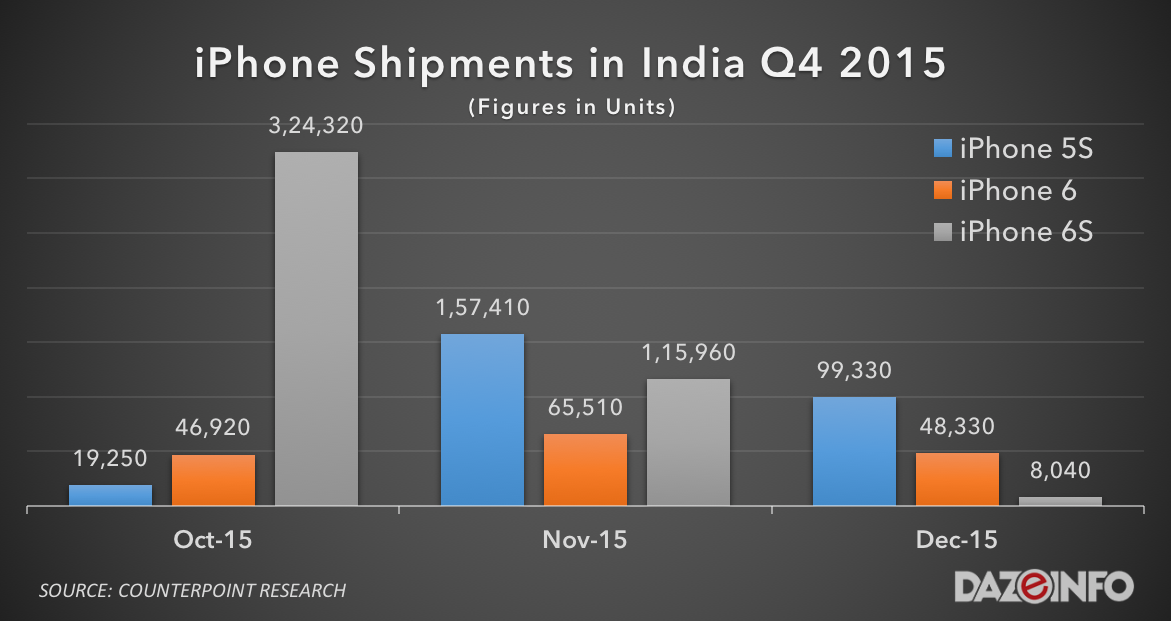 Apple Inc. (NASDAQ:AAPL) crossed the $1 billion sales mark in November once it decided to push through the Indian market early in 2015. It recorded an impressive growth of 44% in sales during the recent financial year which ended on September 30, 2015.

A fresh report from counterpoint suggests that Apple iPhone sales in India rose to a record number in the October-December, 2015 period when the smartphone giant shipped 800,000 units. During the preceding year for the same quarter, Apple shipped a record high of 500,000 units of iPhone. Despite a global production cut in 2016, Apple has managed to capture a record shipment in the Indian smartphone market.

Because of the high price the newer models of the iPhone had a lackluster demand during the initial launch as well as during the festive season in India. The iPhone 6s model was then cut down to around Rs 52,000 to Rs 55,000 ($784 to $830) in December to revive Indian sales.

Pricing Has Been The Biggest Hurdle For Apple In India

The iPhone is the main driver of Apple’s overall growth; Since Q1 2013, entire iPhone sales accounted for more than 50% of the company’s total revenue, which is expected to rise in the coming months. Despite, Apple is continuously losing out to its rival Samsung in US—the iPhone sales share went down to 29.2% in Q3 2015, from 32.6% during the same period last year.

However, even though the Chinese smartphone market showed signs of the meltdown in 2015, the company posted an 84% increase in sales of iPhone in the Chinese market, along with a $23 billion operating income for the last fiscal year.

Nonetheless, the scenario of the Indian smartphone market is different; the number of internet users in India surpassed 354 million by the end of June while over 1.03 billion Indians are hooked on to some form of wireless devices wherein more than 21.2% of them accounted for smartphone users. This implies that more than half of the population is yet to receive an Internet subscription or a smartphone— which forms a huge number of First Time Users. Apple has acknowledged the gigantic opportunity kept in front of them by planning to set up its own stores in India.

The only concern for Apple in the Indian market is of the Average Selling Price (ASP). According to a Cybermedia research, the ASP (Average Selling Price) for a smartphone in India in 2013 was ₹13,000 (US$200) which stepped down to a considerable ₹10,700 (avg US$160) by the end of 2015. Thus, the premium segment of the Indian mobile handset market (> ₹50,000) like Samsung’s Edge Series smartphone and Apple’s iPhone 6s accounted for mere 0.6% of the market. This will act as an advantage to Apple as the premium, the high-end sector is still a niche market in India. Also, several reports show that the earlier iPhone 4s saw an increased sales during the festival season in India with prices dropping below Rs 10,000.

With the rumours of Apple’s new 4-inch iPhone model becoming a reality, Apple could get a considerable chunk of the smartphone market this year if the pricing is done right.