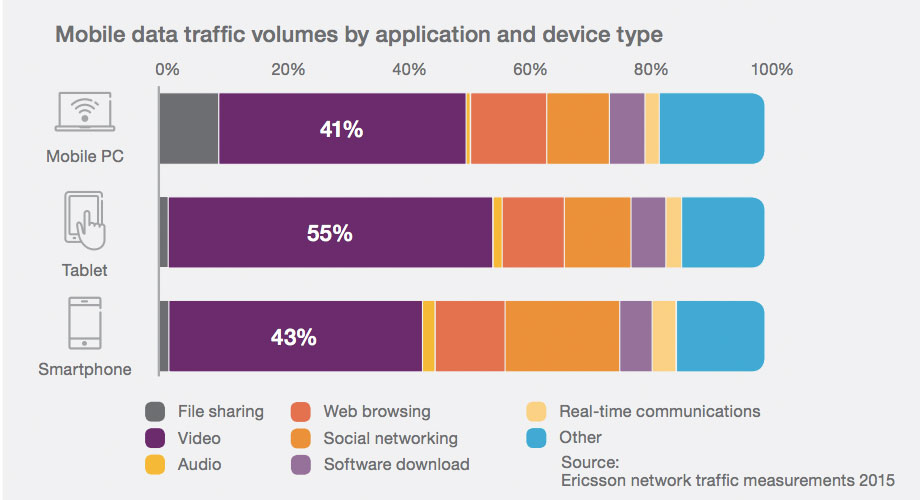 With the proliferation of smartphones in today’s modern world, we find that most businesses are moving away from the website or desktop experience to a more app-centric experience. While particularly visible among big box stores that are currently undergoing a sea change from brick n mortar to a more virtual space, this is a growing trend among all sorts of businesses. In the end, this does bode well for the end user who is eventually treated to a more customised experience. The flip side to this trend, however, is the fact that every app developer is now concentrating heavily on driving up user engagement in their apps. The obvious downside to this is wastage of time but another point to consider is the increased cellular data usage.

Stuck in a hectic life, the regular smartphone user spends most of the time with their devices outside the realm of WiFi. In fact, nearly 13% of all Americans adults are dependent on their cellular data plan for their internet connectivity. While the number may seem small at first glance, considering that 68% of adults own a smartphone, nearly 1 out of every 5 people who own a smartphone depend on their cellular data for connectivity. A 5% percentage point increase from 8% to 13% over 2 years shows that this trend is growing rapidly and has no plans of slowing down anytime soon. With that in mind, we take a deeper look at the Ericsson report and their forecast for the future of mobile data connectivity. Estimated values predict 85% of all broadband connections to be based off mobile data by 2021, and in this article, we take a look at the breakdown of those numbers and the possible impact of it on consumers and industries alike.

A Massive Growth Spur in Mobile Data is Imminent

While we used the US as an example to stress the importance of mobile data subscriptions in even developed and technologically advanced markets, the real spur in data volume, as well as number of subscribers, is expected from regions in Asia Pacific, especially countries like India, where 60% of users access Internet services from their smartphones.

Thus, we see that the scope of development in mobile broadband varies widely from region to region depending upon penetration of wired broadband services as well as a number of other factors like availability of cheap LTE-capable smartphones that can facilitate faster Internet. As a result, we have broken down the forecast into three major parts starting off with a look at the global growth rates till now. A quick look at the above graph reveals that voice has not increased significantly in volume in the past years while the growth of data traffic is appreciable. Data grew at a rate of 14% QoQ and 65% YoY over the last half a decade. The huge increase in data traffic can be traced back to the increased proliferation of smartphones and faster Internet Connectivity over Cellular Networks.

A Regional Breakdown of the Data Consumption Patterns Total mobile data traffic is expected to grow at a CAGR of around 45% with Asia Pacific being the contributing the maximum volume in traffic, nearly 40%. Interestingly enough, the data consumption per month per subscriber is significantly lower in Asia Pacific compared to the other regions. In fact, North America leads the pack with 22 Gb of estimated data consumption per consumer followed by Western Europe at 18 GB. Asia Pacific languishes behind with 7 Gb of data consumed nearly one-third that of North America. There are large differences in consumer patterns across regions, and that can be attributed to various factors such as data pricing, the infrastructure of telecom providers and also the smartphones themselves. It has been found that switching to a newer iteration of the same smartphone series can spike up data consumption by 40%, something that OEMs would do well to keep in mind.

With so many socio-economic factors at play, each region has been analysed separately emphasising on the target areas of growth for that particular market.

Video Consumption to Rule the Roost Across Devices

Regardless of market and connection type (HSPA or LTE) it has been seen that video streaming has been the highest data consumer among all devices clocking up nearly half of all data consumed. Among video streaming apps, YouTube had the lion’s share in all markets, with nearly 50-70% of all data traffic. In countries where it is available, Netflix came in a close second with 10-20% of cellular traffic. While the majority(30%) of smartphone viewers preferred watching shorter self-made content on the smaller screen, there is a growing trend (20%) of people watching on demand Television shows and movies on their smartphones.

While tablets with their bigger screen may be more suited for content consumption, since 2012 there has been a 70% increase in the number of consumers who prefer watching content on their smartphones. Interestingly enough, among the younger audience, nearly 2/3 rd of their time was spent consuming TV shows and videos on tablets and laptops. While video consumption was king on smartphone, social media followed close behind! There has been a steady increase in the volume of data traffic attributed to smartphones in recent years with nearly 20% of total volume on mobile in measured markets. This segregation of different classes of devices primarily used in various consumption scenarios forms a nice segway into the next part of our article where we discuss the apps that have led to the rise in data consumption across devices. One quick glance at the graph above will reveal that the video streaming juggernaut will continue onwards to 2021 growing at a rate of an estimated rate of 55% YoY. The next biggest player in today’s scenario is social media which will see it’s data volume decrease from 15% to 10% over the next period of 5 years. This will not be due to the decline of social media usage, but more as a result of video content increasing in resolution in keeping up with the screen resolution of devices and, as a result, increasing data consumption by a multiple of 14.

Consumer preference has shifted more towards an app-based interactive experience compared to web browsing and we see that web browsing in the percentage of data consumed has gone down in all three mediums. This can be attributed to optimisations of search results as well as a more app-focused search experience as seen by the latest endeavours from Google. As one cursory glance at the graph above would reveal, a vast majority, in fact, nearly 90% of all data traffic would be from smartphones by 2021. We reserved this statistic for the last as we find that it wraps everything up that we talked about in this article very nicely. The forecast shows that there is a ten-fold increase in traffic for all devices by 2021 where smartphones will lead the way with a multiplier of 11x.

The times ahead will see a new generation of apps and content being made as traditional industry giants like wired ISPs and Cable companies will struggle to make themselves relevant in a sea of changing interests. It will be interesting to see how YouTube Red and Netflix shapes up the future of entertainment, and if Facebook with its video and messaging services can stay relevant in the social media of the future. It is time for telecom providers to sit up and take notice of the VoIP competitors that threaten to take over the already depleted voice calling market. It is time, to evolve!
vascript”>