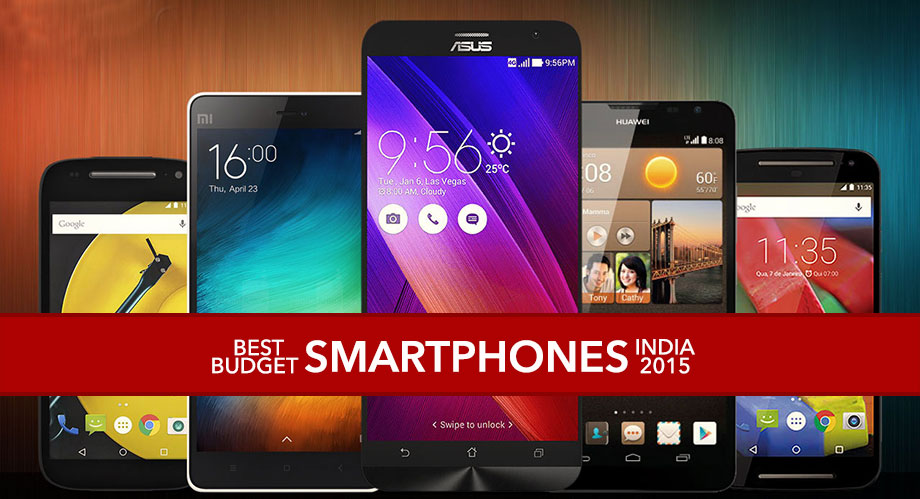 It has been a great year in tech, and we are back with the refreshed list of best budget smartphones in India 2015. Some of the new entrants have managed to mark their presence, while others have faded away from public memory. This season of festivities, we begin our celebration with best budget smartphones that have won the hearts of the public and reviewers alike! With the perfect mix of price and performance, these pocket rockets make as the perfect Christmas gifts.

Nearly 71% of smartphones sold in India belong to sub-$200 category. Because the budget category is so overcrowded in India, with phones available at every possible price point; we decided to break this one up into 3 categories according to their price tags. However, these phones often punch way above their weight so no matter which one you pick up, you’re guaranteed to have the best bang for your buck. If you’re a first-time smartphone user or looking to gift someone who is, we have added direct buy links to all the phones mentioned in our article, so that you don’t have to waste any time hunting around once you’ve found your dream smartphone!

So starting off with the list we have sub-categorised it with best budget smartphones in India under 7,000. While not a bad choice in any way, they each come with some form of compromise. However, their affordability and overall competence make them well worth their salt.

The budget offering from Yu, Yu Yuphoria comes packed with a quad-core Snapdragon processor and 2 gigs of RAM. Rounding things off are a pair of decent cameras and an expandable micro SD slot for those who like to carry their media around with them. The Meizu M2 is a quirky little phone but don’t let its quirks fool you, it’s quite a powerhouse under the hood. Meizu’s interpretation of Android might not win them the hearts of Android purists, but Flyme OS is simple and easy to use especially for first-time users. Xiaomi has taken the lower and middle-end of the Indian market by storm, and this is a clear indication of it as the Redmi 2 Prime clinches the top spot in our budget smartphone under 7k category. There is nothing much to complain about with this device, but nitpickers as we are, we have found some cons you may want to keep an eye out for before you get your hands on one of these bad boys! In the world of electronics, moving up one price tier can fetch you quite a lot more for your money’s worth. With that said, the major difference in this price segment is bigger screens and better camera performance with internals being bumped up in most cases from the previous tier. Here is the list of best budget smartphones in India 2015 under Rs, 10,000.

Asus has pleasantly surprised us with their Zenfone 2 lineup of devices being both affordable while not comprising on the performance side of things. The Asus Zenfone 2 Laser claim to fame is it’s camera and barring a few software bugs; the camera does outperform everyone else in this category. After a lot of internal debates, the Lenovo A7000 made the cut while the K3 Note lost out! The main reason for the A7000 winning out was it’s lower resolution screen consumed way less battery and provided a smoother experience overall. Coolpad has made their presence felt in India with the Note 3. The specifications of this device simply make it unbeatable in its class. It even features a fingerprint sensor, something that is missing in most phones even twice its price. While they’re being touted as “budget” smartphones, the specs and performance of these handsets can give any modern flagship a run for their money. You can safely buy any of these devices and stay contented that the hardware of your device will stay relevant for at least the next couple of years.

The new turbo edition of the Moto G has a few tricks up its sleeve. One of the few complaints with the third generation Moto G was that the battery backup wasn’t great. Moto has tried to rectify that with the Moto G Turbo and its fast charging capabilities. You can’t make an Android list and leave out the largest smartphone OEM in the world! Samsung finds a place at number 2 with the Galaxy J7, a capable device that will be the best bet for those who are looking for a top tier brand within a budget. Finally, we come to the number one spot on the list! Xiaomi makes a return to the list yet again, snagging the number 1 spot with its flagship device for the year, the Mi4. Superior build quality and flagship class internals make this an easy pick for this year’s top pick for the best budget smartphone in India. With that, we come to the end of our list for the best smartphones in India under 15k.

But wait! We promised you 10 phones! And there are only 9 in here, What kind of brutal deception is this?!

Well, dear reader, have no fear, for there is another phone that makes the list but doesn’t find itself in any spot.

Available for a limited time from 21st to 23rd December, exclusively on the Flipkart app, the Xiaomi Mi 4i is an excellent device at the reduced price. However, at its regular price of 13k we would say that you rather give it a miss and look to snag its elder sibling the Mi4 at a couple extra thousand bucks.

Finally, this brings us to the end of the editor’s list of Best Budget Smartphones in India 2015. We had a fun time compiling this list and hope that you have one too with your shiny new smartphone! We will see you again next time with another countdown for the best smartphones of the year. Till then, bye-bye and Happy Holidays!!