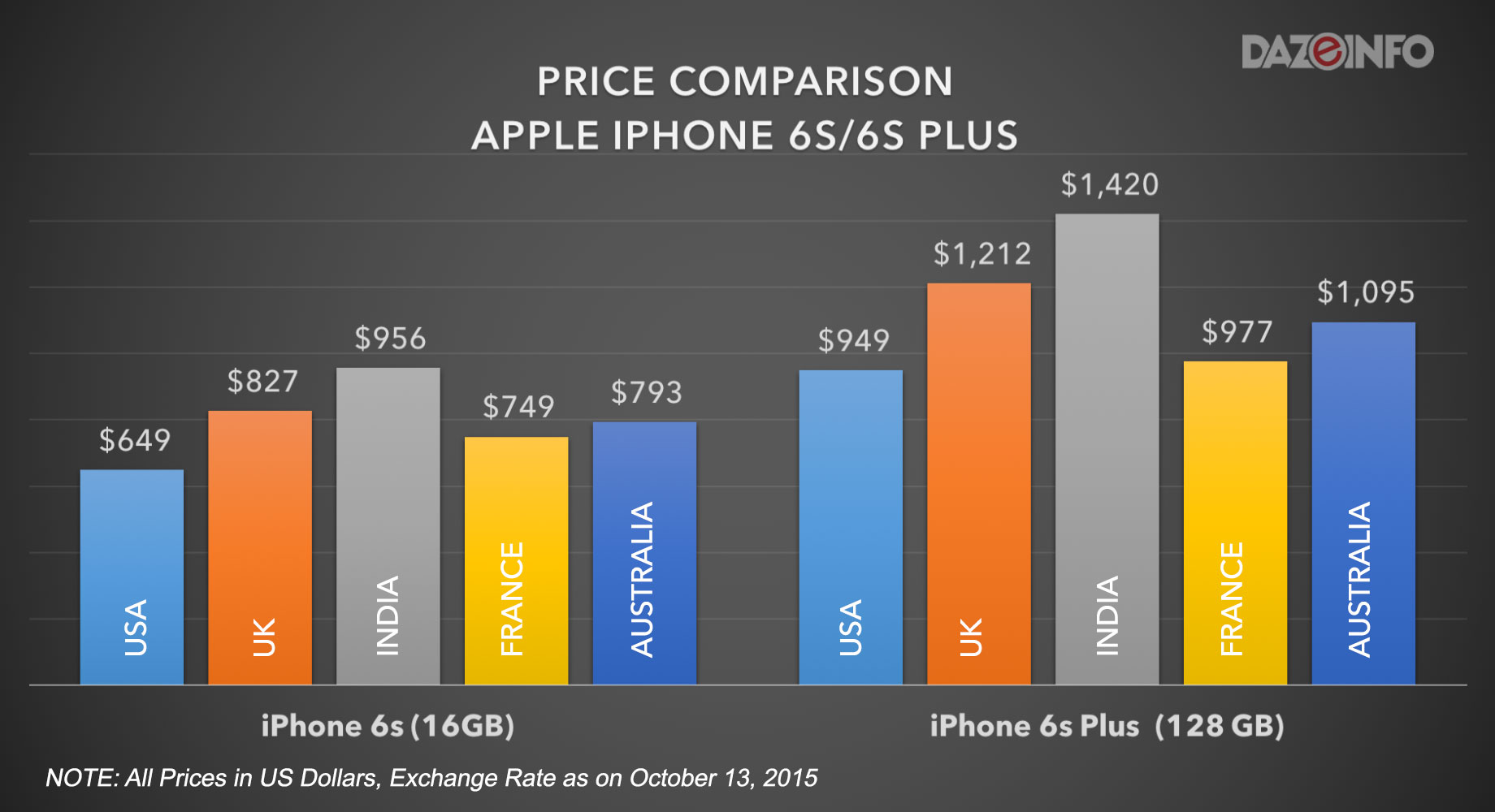 Apple Inc. (NASDAQ:AAPL) has recently released their new iPhones. Both iPhone 6s and iPhone 6s Plus are already in stores and flying off the shelves in most countries of the western world. However, those waiting to get their hands on the shiny new iPhone 6s or iPhone 6s Plus in India might be in for a rude little shock. Releasing on October 16th, an entire 3 weeks after its US release, Apple has set the price of iPhone 6s starting at an exorbitant Rs 62,000 (US$950) in India.

While iPhones are expensive no matter where you are in the world, and Indians have always had to pay more for their electronics than their western counterparts; this is the highest that Apple has priced their iPhones at launch with the top of the line iPhone 6s Plus costing a cool Rs 92,000 (US$1,450). Will this turn out to be a brilliant move cashing in huge on the initial hype of the new devices or will this alienate most of the high-end Indian smartphone market? That’s what we intend to investigate!

Prices Round the World: iPhone 6s and 6s Plus

Let’s have a look at the numbers and see what citizens of each country will have to shell out to grab a 6S or 6S Plus for themselves!

We will be looking at carrier unlocked variants of the iPhone 6s and 6s Plus because while carriers in some countries do offer the new iPhones via contract at a much lower price, in countries like India, there are no such carrier subsidies! One glance at the chart reveals India is clearly the most expensive of the lot with the Indian consumers paying the US equivalent of $995 for the 16GB model of the iPhone 6s, $306 more than their US counterparts. While the price gap lessens as we move into the other countries in the list, there is still a significant gap in the pricing with Indians paying AU$231 more than Australians and £80 more than those in the UK.

The disparity in price is reflected in the top end model as well, Americans pay $949 for the 128GB 6S Plus, a full $466 less than those in India. In Australia, it’s AU$1,490, AU$460 cheaper, while those in the UK pay £790  a difference of £135 compared to the Indians. So what does this pricing strategy reveal about Apple’s plans for the Indian market?

Apple and its Indian Plans While the iPhone has always been priced higher in India compared to the rest of the world, this is the first time that the launch price has taken such a massive hike. The reasons behind it are varied, from the falling price of the Indian rupee to Apple realizing that the premium pricing might work in their favor of creating an exclusive brand image than go against them. Will Apple’s high stake gamble on the Indian market pay off? We shall look into it further in the next segment.

In Q3 2015, Apple recorded a mammoth YOY growth of 93% in India. This was the first time in history that Apple growth figures in India have surpassed those of China with total annual sales of Apple products in India touching the billion dollar mark. Speaking of Apple sales in India Tim Cook recently remarked

These numbers are unbelievable and they’re done in an environment where it’s not the best of conditions.

However, one worrying thought remains among the amazing growth trajectory shown by Apple, the majority of the devices shipped during the period has been the older generation of iPhones with a bulk of the sales coming from Apple re-launching the outdated iPhone 4 at the Rs 15,00o price point. There are a few reasons why phones cost so much more in India than in any other western country. We will try to highlight just two of them here.

However, none of these reasons justify the 10.71% increase in MSRP in iPhone prices from the 6 to the 6s.

According to Neil Shah, research director at Counterpoint Research, “Anything above 60,000 rupees is way out of reach for even an average rich urban consumer,  with respect to the Indian smartphone market.”

With that in mind, Samsung has been selling their latest flagship, the Galaxy S6 at Rs. 40,000 (US$610)  price point and Apple as a direct competitor in the high-end market may end up losing a significant share of their market to them.

According to a report in 2012, the average monthly salary of Indian employees hovered around $215; thus one would have to spend the entirety of nearly 5 months of salary to get their hands on an iPhone 6s. Does this reflect a lack of foresight and research on Apple’s part into the Indian smartphone market?

With India poised to be the next big thing in the global smartphone market, the Indian market is now flooded with Android smartphones in the sub-$300 range from Chinese manufacturers like Xiaomi, Lenovo and One Plus. Apple did try to get into the market with their iPhone 4 relaunch at Rs 15,000, but one wonders if it’s too little. Apple managed to sell close to 1.7 million units this year which is up 55% annually. Only half of them, however, have been iPhone 6 series which seems to indicate that the pricing puts the newer devices out of the grasp of their fan base. India has been treated far too often as a dumping ground for outdated electronics, and the Indian public may have wizened up to it and are trying to move away from the allure of the brand name!

Apple faces an uphill task selling the iPhone 6s and 6s Plus at such a huge markup, against stiff competition and a slumping economy. But, as the initial sales figures show, Apple will continue to sell their phones in huge numbers because of their massive fan base who just want an Apple product regardless of the cost. Apple has been optimistic of their sales figures in India and aims to touch seven million sales per year by 2018. With well placed EMI schemes and strategic tie-ups with various carriers, Apple could just pull this off. This is in part aided by the Indian consumers who are always under a notion that more expensive means better and consider carrying an iPhone more of a status symbol than anything! With reports coming in of overpriced and warranty-less iPhones imported from other countries popping up in sites like Quikr and eBay, the hype for the new iPhones is at an all-time high among Indians. Can the new tagline of – ‘The only thing that has changed is everything!’ change the Indian mindset?