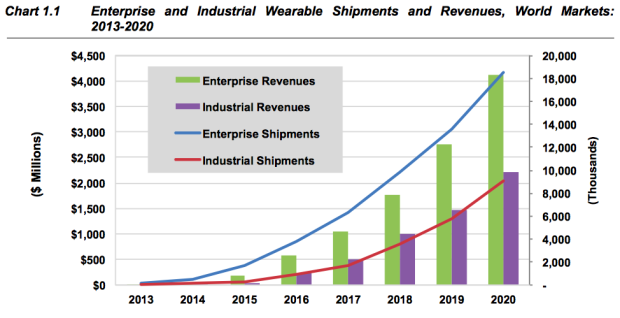 The terminology ‘Wearable Devices’ widely refers to the electronic gadgets which can be worn by people and converges all computing applications in a single device such as Google Glass, Smart Watch, Fitness Band and so on. These wearable are influencing not only the personal life activities but also work-life in order to accomplish the tasks in most effective and efficient manner. Consequently, the adoption of wearable devices in Enterprises and Industrial Markets is expected to increase exponentially by 2020. According to the latest report from Tractica, the revenue from wearable devices market for enterprise and the industrial segment will grow to $6.3 billion by the end of the year 2020 at a Compound Annual Growth Rate (CAGR) of 140% from $14 million in 2013.

The Corporate and Enterprise Industry of wearable is still small, but it’s a growing market. The market accounted for 1% share of the total revenue coming from wearable devices in 2013 but is estimated to account for 17% by 2020. Smart watches and fitness bands are the main drivers of this growth but in the next few years the trend will shift only to smart watches. Despite its higher price, smartwatches would be preferred over fitness bands as the farther ones pack more sensors, offer improved battery life and provide better value for money. The other smart devices, likes of smart clothes, wearable camera, body sensors, will contribute fewer than 10% of total wearable industry coming from enterprise and industrial segment. Wearable devices can be used in various fields as:

Market Barriers: But, despite all above benefits, the wearable devices’ market has also got certain challenges that are hampering the growth of the industry. There is a number of barriers which can affect adversely the adoption of wearable devices: