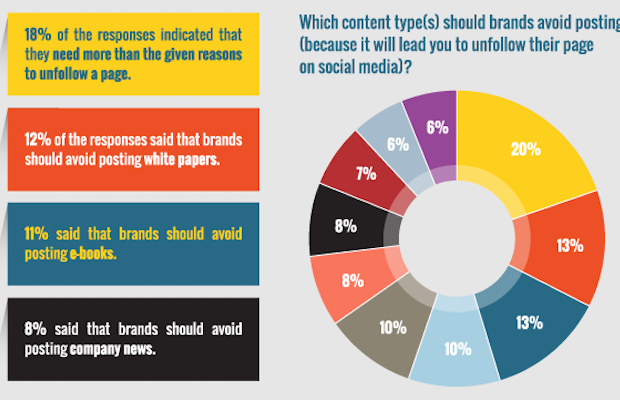 There is no doubt that online businesses are turning to social media sites in order to increase followers and retain them. Marketing Donut Contributor recently released an infographic showing how social media can be used to leverage the B2B business in 2015. While brands are becoming more conscious in managing their online presence, another trend that is setting in is the ‘Unfollow Algorithm‘. Although Facebook Inc. (NASDAQ:FB) took the lead with 1.35 billion users in the last quarter of 2014, surprisingly Facebook has the highest rate of unfollowing among all the social media sites.

Fractl and BuzzStream recently conducted a survey of around 900 social media users to get an overview on why people unfollow brands on social networking sites. Some interesting findings are:

Most people simply unfollow the brand, without doing anything else. 20% of the respondents agreed that they hide the brand’s posts from their news feed, while only 12% said they issue a tweet mentioning the change.

From the survey, it became a clear picture that if the content is repetitive or boring, and brands are unable to conduct real-time customer engagement, customers will leave without a second thought. There are few more interesting findings that brands should take notice of-