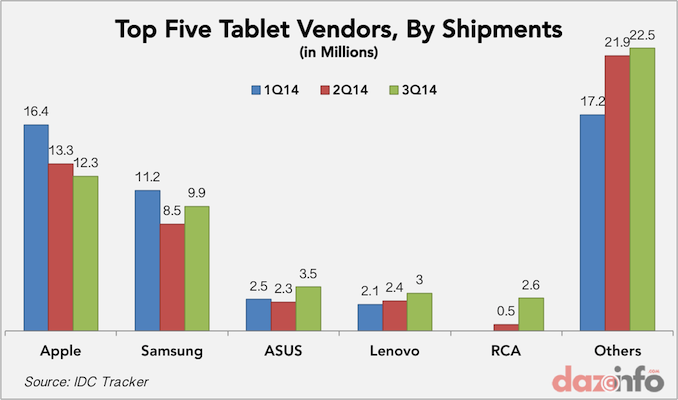 In the continuation of the trend as seen over the last two quarters of 2014, the Q3 2014 also witnessed an 11.5% year-over-year rise worldwide in the tablet industry. The global tablet shipments totaled at 53.8 million units in Q3, 2014 as per report from the Worldwide Quarterly Tablet Tracker by IDC. The figure hovers close to the Q1 2014 shipment of 50.4 million units. The tablet shipments also saw a quarter-over-quarter growth of 11.2%. The positive growth of the tablet industry is being considered as a sign of revival when compared to the 1.5% quarter over quarter decline in tablet shipments in Q2 2014 when the number of units shipped reached to 49.3 million. Apple Inc. (NASDAQ:AAPL) saw an annual decline of 12.8% in shipment of its iPad product line but still managed to stay at the top position with a market share of 22.3%. The total iPad units shipped in the third quarter of the 2014 were 12.3 million. Samsung Electronics Co. Ltd. (KRX:005930) fared a close second with a market share of 18.3% selling a total of 9.9 million tablet devices in Q3 2014. Though the South Korean business conglomerate witnessed a growth of 5.6%, the numbers are nowhere close to its performance in Q1 of the year when it had a market share of 22.3%, it has gained some grounds in comparison to the Q2 market share of 17.2%. Though Apple is maintaining a steady revenue with its sales but its receding market share is alarming. Samsung is gaining in slowly and gradually and it might possibly overcome the Cupertino tech giant in the coming quarters.

RCA – one of the America’s leading home entertainment product manufacturer – was a surprise entry in the top 5. The company shipped 2.6 million units of tablet in the US alone. How it fares in the future will be interesting to watch. The ASUSTEK Computer Inc. (TPE:2357) and Lenovo Group Ltd. (ADR) (OTCMKTS:LNVGY) seem to be at a tug of war. Asus regained its third position displacing Lenovo to the 4th place. The exchange of positions between the two rivals comes as Lenovo shipped 3 million tablet units in Q3 2014 with a year-over-year growth of 30.6%, whereas Asus shipped 3.5 million units in the quarter facing an annual decline of 0.9%. The respective market share for Asus and Lenovo in the quarter remained 6.5% and 5.7%. The market shares of other players in various locations accumulated to 41.8% of total tablets shipped in Q3 2014 as compared to 37.4% in Q3 2013. The year-over-year growth in units shipped stands at 24.4% for the other players.

US prevailed as the biggest catch for tablet industry:

Though at the end of the third quarter Asia Pacific was projected as one of the largest markets for the tablet industry but the results clearly show US as the biggest market with the maximum chunk of growth occurring in the region. Compared to the world’s annual growth in tablet shipment of 11.5% the US bespoke of a year-over-year growth of 18.5%. The surprise entry of RCA into the top 5 vendors of tablets definitely had an impact on the US market and its ranking. The back-to-school program – an initiative of the Government of USA – coupled with the thanks giving season saw a surge in tablet sales in the country. The strategy adopted by Verizon, of selling connected tablets which aim at decreasing user dependency on Wi-Fi, led to accelerated sales. The tactic will much likely be adopted by other carriers not only in US, but globally. Asus and Lenovo might come up with connected laptops in the APAC region preferably China where the carrier model is more prevalent.

What is the future of Tablet Industry?

With many of the smartphone giants like Samsung killing their small screen (7-8 inches) tablets as their demand is dwindling with the increasing popularity of the phablet segment of smartphones and many other manufacturers following suit, the devices might become obsolete in the developed economies. But with many local players coming into the picture and carriers all around the world selling white label tablets we might see some interesting changes in the market worldwide.