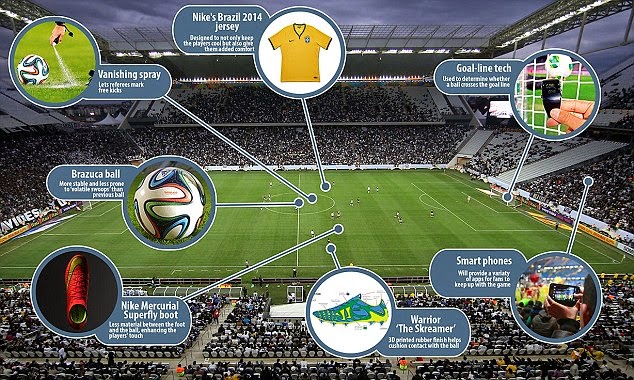 The sports technology and equipment market is valued at US$261 billion globally and with the evolution of new technologies the market is expected to grow by 20% year-over-year. The demand for more transparency and effective management of control over the matches is roaring and this could only be satisfied by injecting more tech driven processes.

During the World Cup in Brazil this summer, the world saw goal-line technology used for the first time in the world’s biggest international soccer competition. True, the technology had been tested before and a similar technology had already been used in the English Premier League during the 2013-14 season – but this was its first major “outing”. And it may be a watershed moment in the development of the planet’s most popular game.

Hitherto, FIFA – soccer’s international governing body – had been resistant to the use of any technology to assist referees, arguing that it could disrupt the flow of the “beautiful game”. But this had not been the experience of technology’s use directly on the field of play in other sports. Specifically, perhaps the two best such examples can be found in tennis and in both types of rugby. With these examples, technology’s use in assisting refereeing or umpiring decisions (in fact – taking the decisions out of the hands of the on-pitch or on-court officials) has become part and parcel of the fans’ enjoyment of the sport – both at the location itself and at home viewing on TV.

At Wimbledon, which is perhaps the most prestigious tournament in the tennis calendar, “Hawk-Eye” technology has been used since 2007. Under the system that is currently in place, players are allowed to challenge three times per set – if they get those challenges wrong. If their challenges are correct, then these don’t count and they can go on challenging. The interesting thing is the way the video playbacks from the Hawkeye system are welcomed both on court and at home by the fans. This has “proven” that fans want to see the correct decisions being made. Similarly, the technologies now used in Rugby Union and in Rugby League have become very much part of the action. The enhancements have allowed those with a particular interest in these sports – whether it’s from a betting perspective or a devoted fan’s point of view – to benefit and receive more correct rulings than ever before.

In these sports, the “video ref” in league and the “Television match official” (or simply ‘TMO’) in union reviews the play to decide whether a try has been correctly scored. The on-pitch match official simply refers to the referee in the stand who reviews the video whilst we all watch in the stadium or at home; we all see the same images at the same time they’re being reviewed. This can go on for a minute or more with a tough decision, but again, the evidence so far is that the fans love it as part of the action.

And we saw the same thing in Brazil. Here, the French team became the first to benefit from the new technology during their 3-0 win against Honduras. Karim Benzema’s shot came off the post, then rolled along the goal-line before hitting Honduras’s goalkeeper – Noel Valladares – and maybe crossing the line at some point in proceedings.

The referee deferred the decision to the video ref and the goal-line tech, and we all saw that in its first movement, the ball hadn’t crossed the line, but that it unequivocally had done so as it rebounded off the unlucky keeper.

This will prove to be a watershed moment in football’s development – and maybe in the wider sports arena as well. Technology is now here to stay – and has been shown to have been understood and welcomed by the fans, notwithstanding the short breaks in play. The overall effect of decisions-assisting technology has been demonstrated to have enhanced the fans’ enjoyment of different sports and that, ultimately, is the only decision that counts here.