Darkest Before Dawn: Can India Survive Its Worst Ever Recession?

Bolt your doors, batter down your hatches, brace yourselves. Recession is about to make landfall.
Read more

Last year when Apple Inc. (NASDAQ:AAPL) was accused of recording everything that iPhone users were talking through...
Read more

Bill Gates is once again at the centre stage of controversy related to novel Coronavirus.
Read more

Apple Inc. (NASDAQ:AAPL) is taking the punch right on the face as the company has been constantly losing its Tablet market for last four quarters, despite of having ventured into small screen tablet market with iPad Mini. In 2013, Apple’s tablet market share dived down to 36%, losing its potential market to Samsung, largely. Right opposite to Apple’s performance, worldwide tablet sales grew 68% in 2013 and Android undisputedly captured 62% of the market. Overall, 195.43 million tablets were sold to end users in 2013, of which 120.9 million were powered by Android, followed by 70.4 million iOS powered tablets, according to Gartner. 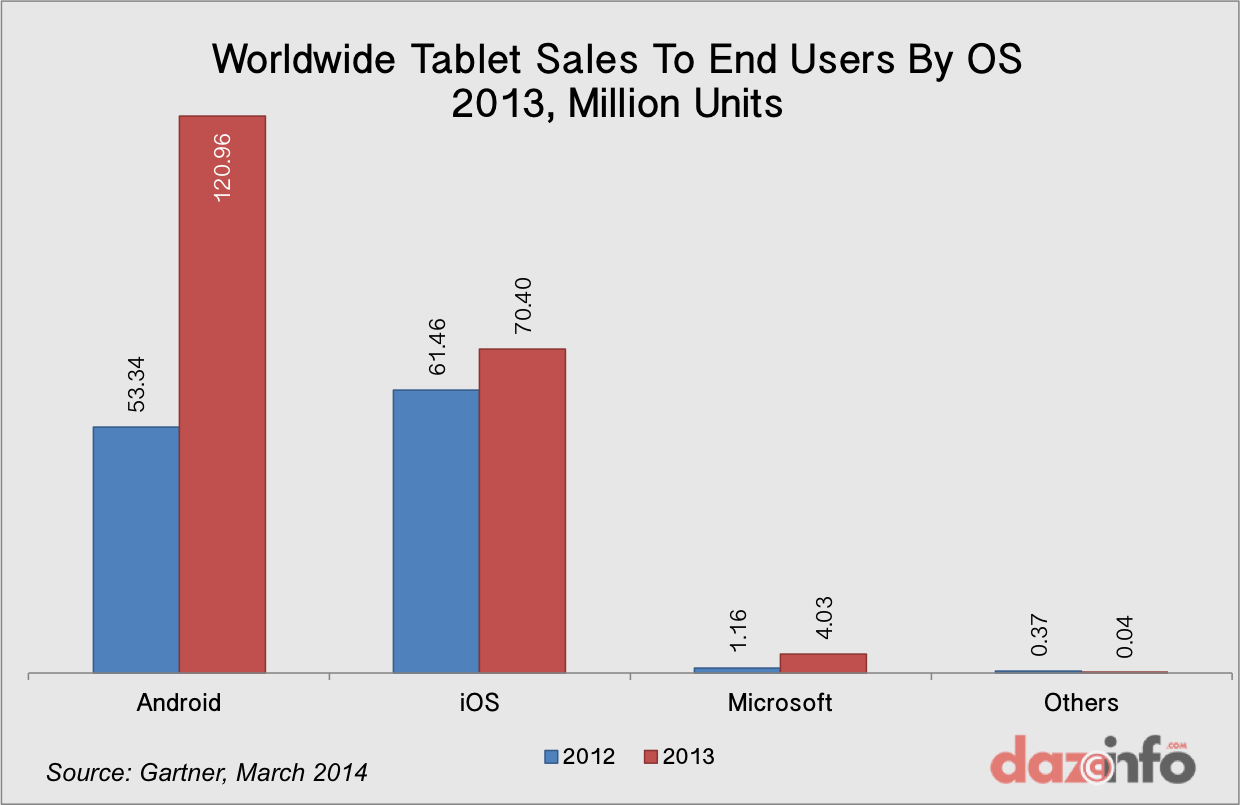 The low-price small-screen tablets fueled the growth of worldwide tablet market in 2013. Majority of first time tablet users rushed to grab 7 to 8 inch screen Android tablet that helped Android OS to secure the biggest pie of tablet market and also took the lead position leaving iOS behind, first time ever.

“In 2013, tablets became a mainstream phenomenon, with a vast choice of Android-based tablets being within the budget of mainstream consumers while still offering adequate specifications,” said Roberta Cozza, research director at Gartner. “As the Android tablet market becomes highly commoditized, in 2014, it will be critical for vendors to focus on device experience and meaningful technology and ecosystem value — beyond just hardware and cost — to ensure brand loyalty and improved margins.”

In 2013, Apple’s iPad market share shrunk to 36% as compared to 52.8% in the previous year. From a vendor prospective, the company still holds the lead position, thanks to strong fourth quarter when Apple introduced iPad Mini 2 and iPad Air. Though Samsung exhibited the highest growth in tablet market 2013, it’s still way behind Apple at number two position. The Korean electronics giant recorded 19.1% of total tablet sales 2013 with the help of aggressive promotion and marketing of its Galaxy range tablets. 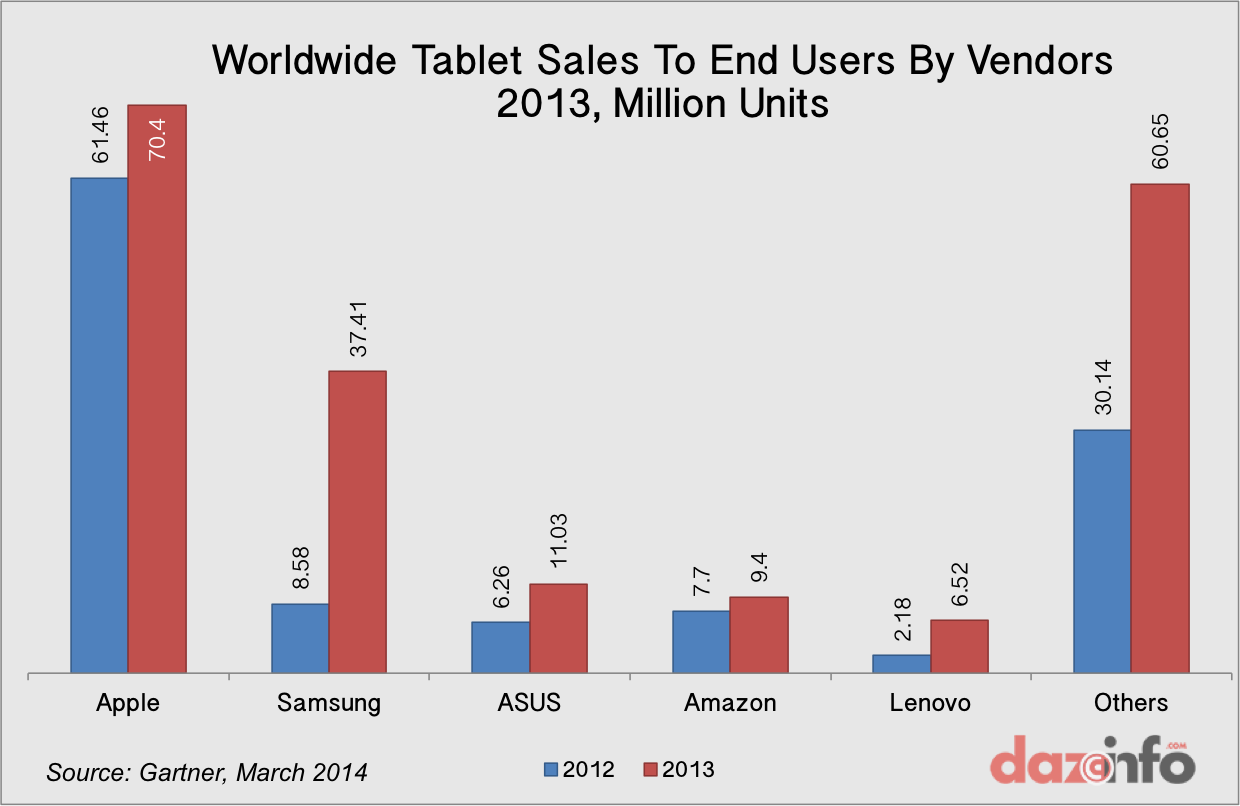 Many of us see Apple’s 2013 performance in tablet market in an assorted prospective. In 2013, Apple’s iOS tablet market dropped to 36% though, the company sold almost 9 million more iPads during 2013. The drop in its market share was largely influenced by the improved quality of smaller low-cost tablets that grabbed more eyeballs than ever before. The demand of these tablets was relatively higher in emerging markets that recorded growth of 145% in 2013, while matured markets grew 31%. Apple iPads are still the most favorite in higher end of the market, while company is looking to improve its market share in emerging markets with iPad Mini.

The global tablet market has become a though ground to play for branded hardware driven players. Local players in emerging countries are constantly challenging Samsung and Apple, the two top players of tablets industry controlling 55% of total market. However, as more and more number of first time mobile device users are willing to upgrade themselves, smaller low-price tablet market looks promising in coming years.

After laying off thousands of employees in the US, Uber is scaling down its operations in India...
Read more
Mobile

Last year when Apple Inc. (NASDAQ:AAPL) was accused of recording everything that iPhone users were talking through Siri, the company was quick...
Read more
Brief

Bill Gates is once again at the centre stage of controversy related to novel Coronavirus. Battling falsehood and paranoid...
Read more
Brief

Darkest Before Dawn: Can India Survive Its Worst Ever Recession?

Bolt your doors, batter down your hatches, brace yourselves. Recession is about to make landfall. According to Goldman Sachs, a...
Read more
Brief

The COVID-19 crisis, which shows no sign of stopping any time soon, has left no life untouched in terms of impact. It...
Read more
Brief

WeWork Valuation: $2.9 Billion, Way Below Than Estimated $47 Billion 6 Month Ago

If you are thinking it is some kind of clickbait, you are highly mistaken. The debate on the valuation of WeWork once...
Read more

Ever since the popular social media app TikTok entered India, it has been growing very aggressively in terms of users. Within a...
Read more

Amid this global pandemic, when companies are struggling to find new verticals to pivot towards in order to maintain their revenue and...

Facebook Fake Accounts: The Inevitable Battle That May Last Forever!

For all social media platforms, battling with the growing number of scammers, hackers and all other kinds of malicious users have become...

The worldwide smartphone shipments in Q1 2020 decreased to 275.8 million units, posting a record decline of 11.7% YoY. The damages due...
Read more

Indians Now Spending 4.3 Hours On Their Smartphones Amid The Lockdown [Report]

The advent of high-speed mobile internet in India has resulted in more number of hours people are spending on their smartphones. The...
Read more

US Digital Ad Spending: Brands Are Spending 4X On Mobile Than Desktop!

Brands, nowadays, are investing more in mobile digital advertising as compared to desktop advertising. Thanks to increasing penetration of smartphone, apps and...
Read more

Consumer Spending On Technology to Clock $1.69 Trillion in 2019 [REPORT]

A new report by International Data Corporation (IDC) on Friday forecasted estimated figures of consumer spending on technology in 2019 and top...
Read more

The above graph represents the Apple annual revenue from products and services, worldwide....
Read more