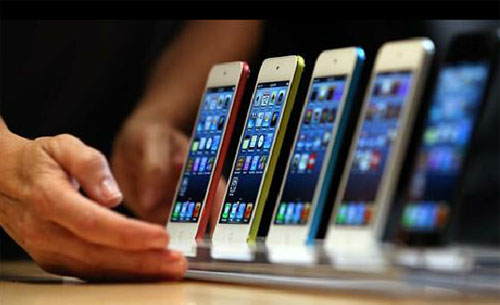 On the other side, Apple Inc. had seen growth in its revenue to 15.6% in Q4 2012, from 3.9% in the previous month. Previously, the company kept India among non-priority list, but it finally started considering the country as one of the most important parts of its business strategy in Q4 2012. Last year, Apple Inc. took crucial decision, and decided to sell iPhones from retail stores rather than relying on just network carriers.  The company spotted fifth in terms of volume with 4.7% market share, despite of selling the products at the premium prices. While in terms of revenue, the company succeeded to grab second position first time in the country, followed by Sony (third), Nokia (fourth), Micromax (fifth), BlackBerry and HTC.

In terms of revenue, it’s clear that Apple Inc.’s iPhone is now the second biggest smartphone brand in India, and fifth largest by volume. Furthermore, revenue of BlackBerry dropped to 6% during Q4 2012, but the company succeeded to grow up device volume more than 3 times during the same quarter.

During Q4 2012 (October-December), Apple shipped smartphones worth INR 1,142 crore (approx $2.09 billion), more than three times of what other brands like BlackBerry and Nokia shipped during the same period. The main difference between Apple Inc. and Samsung’s selling strategy is pricing; Samsung sells smartphones at multiple price tags, while Apple is selling at the premium price tags.

However, Samsung’s officials have reported that the company enjoyed more than 55% market share in INR 20, 000+ smartphones segment. The report also says that Samsung Galaxy Note II was the most selling smartphone ( among INR 20,000+ categories) during the last quarter. Last year, Apple opted Ingram Micro and Redington, which together have more than 10,000 retail stores in the country, helped iPhone maker to increase footprint in India.

Unlike iPhone 4S, Apple decided to launch the iPhone5 in India as soon as possible, almost simultaneously with the global launch. More importantly, Indian mobile phone retail chains including The Mobile Store, Next Retail, Future Group’s eZone, Reliance iStore and Reliance Digital, which together have more than 1,000 stores in the country, have reported that sales of iPhones have doubled in February this year, compared to the previous month.

On the other side, local manufacturer Micromax had also seen a significant growth in its smartphone shipments. The company is currently committing to produce budget friendly Android smartphones to Indian mobile users. Micromax accounted for 12.8% market share in terms of volume, following Samsung. The company is also expected to see growth in terms of smartphone volume in current quarter due to launch of highly-anticipated Micromax A116 Canvas HD, which would be the country’s first quad-core smartphone.

Apple Inc. Is Catching Up Samsung

As per The Mobile Store, the cellphone retailer in India with 800 stores, has just reported that the iPhone 5 has become the second highest selling smartphone model among its stores since the last month of this year, next to Samsung Galaxy Grand Duos. However, the price of Samsung’s flagship model (Galaxy Grand Duos) is less than half of the Apple model (iPhone 5). The mobile retail store has found rise in Apple’s share of total phone sales to almost 15%, from 5% in the past two months.

In simple words, the demand of iPhone 5 is continuously ramping up in the country. Thanks to EMI scheme provided by retail stores which has made the device affordable for Indian customers. It seems that Apple is quickly catching up to Samsung, but it’s still far behind of  the South Korean company in terms of volume. In addition, Samsung could also leverage on its highly-anticipating Galaxy S4 flagship, which is expected to debut in April in India.

But the important point here is that Samsung’s value (in terms of revenue) dropped by almost 12% in the country during Q4 2012, compared to the previous quarter. On the other side, even BlackBerry and HTC have also reported to loss their ground during the period in terms of revenue. Of course, Apple’s aggression towards Indian market has forced other manufacturers including Samsung and Nokia to re-frame their strategies for the market.