Apple To Command 65% Share Of Global Application Store This Year: Thanks To Its Passbook And New Maps Platform

Elon Musk Added Over $100 Billion To His Net Worth In Just 1 Year, Leaves Jeff Bezos Behind

Jeff Bezos may the world's richest person in the world but it's Elon Musk who has been...
Read more

iPhone 12 Plagued With Serious Problems: Should You Buy It, Still?

A serious problem with Apple iPhone 12, identified recently, is good enough to give a second thought...
Read more

It's been a good week for Elon Musk and his electrical vehicle business Tesla. Earlier this week,...
Read more

Now, Apple doesn’t remain a just PC manufacturer; it has become a key company which is providing all sorts of devices related to communication, entertainment and business. With its iOS ecosystem, it has focused on virtual services including digital music, movies and apps. The company is now trying to extend its boundaries into the real-world location with Passbook and new maps platform. It’s endeavoring to make its presence into real-world transaction for travel, daily news, retails and entertainment events. And this the main reason why it’s the world leading company in terms of market valuation.

According to IHS iSuppli‘s press release, Apple is going to record 70% year-over-year growth in app store revenue in 2012. The firm has projected such growth on the basis of addition of Passbook and new maps platform. However, the global Apple App store revenue is going to surge $4.9 billion by the end of this year, up from $2.9 billion in 2011. This year, the company is going to outburst the market by generating half of the total revenue that it made in the last five years. Apple will rule about 65% of the global application store market share this year. 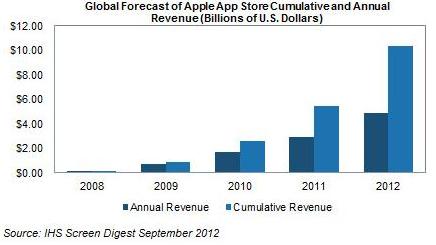 Apple’s one of the most awaited smartphones (iPhone 5)  is now in the market and the new iPhone is occupied with mapping app issues. As I mentioned earlier the new Map has faced several navigation issues; Apparently, the new map app is quite lucrative for the U.S. citizens compare to other parts of the world. 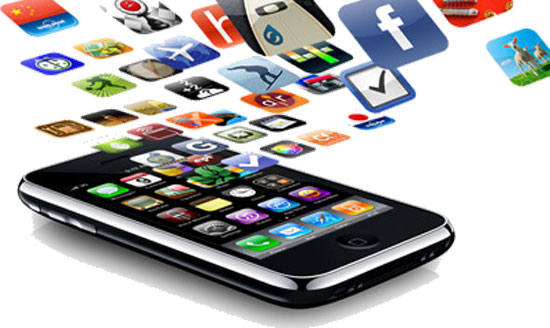 It has been noticed that iOS users remain more sincere compare to Android and Windows Phone’s users in OS updates; 80% of iOS users had upgraded to the iOS 5 till the end of Apple Worldwide Developers Conference this year. What should we expect from them in the case of iOS 6 version? Definitely, they will adopt the new iOS 6 with the same swift, nevertheless, the new OS has more advanced features compare to the Apple’s previous versions.

Apple knows the importance of viable mobile ecosystem and of course, it has integrated new Map location, Passbook and Facebook on its latest mobile OS.  If you are still considering that Apple is just a hardware company, then I think, you are in big gaffe? At present, Apple possesses more than 435 million iTunes accounts with credit cards attached, up from 225 million in June 2011.

Undoubtedly, the company has recorded such impressive growth due to ground-breaking sales of iPhones and iPads. At present, Apple has more than 125 million iCloud users, 130 million Game center users and over 140 million iMessage users. Now, Apple is trying to look beyond its digital content and virtual digital services such as iCloud.

Share
Facebook
Twitter
Linkedin
Pinterest
WhatsApp
Email
Previous articleFinally Apple Launches iPhone 5 Worldwide: Does It Meet Users’ Expectation?
Next articleNokia Claims To Have Better Mapping App Than Apple: But, Why Google Is So Fervent To Build Map App For iOS?

It seems like Flipkart and Amazon squeezed the most out of the month-long festive season in India...
Read more
Brief

Amazon Gets Slapped With Penalty As GOI Prepares To Tighten The Noose On Ecommerce Players!

In a recent move, the Indian Government slapped Amazon on its wrist for not mentioning the country of origin detail for products...
Read more
Brief

The social media behemoth Facebook Inc. (NASDAQ:FB) has once against proved they are the true arch-nemesis of modern-day user-privacy!
Read more
Brief

The dispute between Amazon and Future Retail is, apparently, far from over anything soon as the Singapore International Arbitration Centre (SIAC) has...
Read more
Brief

Google has decided to levy fee on instant payment, starting from the US market. A few days back, Google...
Read more
Brief

Twitterati queue up! As the Twitter account verification process which is responsible for awarding blue badges prepares to...
Read more

Google has decided to levy fee on instant payment, starting from the US market. A few days back, Google...
Read more

ShareChat Acquisition: What’s Google Up To?

The news related to acquisition of ShareChat is once again making rounds on the internet. It seems like Google...
Read more

Starting Next Year Google Will Delete Your Account Data If You Are Doing These Two Things!

Imagine having some important documents tucked away in your Google Drive, and when you open it to access them, they’re gone! All...
Read more

CCI Is Tightening The Noose Around Google Pay, And Google Is Miffed

In what can only be called an interesting coincidence, soon after GPay recently cried foul about NCPI's 30% cap on UPI transactions...
Read more

If you are someone who thinks time travel is just a fantasy, maybe it's time for you to rethink about it.
Read more

Google is currently advising every Chrome browser user, whether they use it on a smartphone or P.C., to download the updated version...
Read more