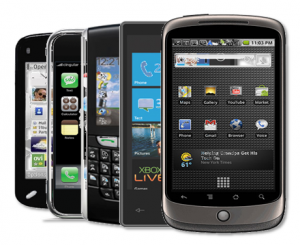 The demand of Android-powered smartphones is augmenting with galloping pace day-over-day. At present, 1.3 million Android devices are being activated every day. After Android, iOS is second largest mobile OS platform in the world–other OSes are still struggling to make their stronghold in the market. Android and iOS are clinching the market share of Symbian, BlackBerry and other OSes. However, Google and Apple have different strategies to grow up their smartphone market share; Google has adopted advertising-revenue-models, while Apple is relying on superior customer experiences and tremendous innovation.

Android’s annual growth rate is expected to continue at double-digit percentages in the coming years, on the other side, its cumulative shipments is going to reach 3 billion in 2016.  It’s well-known that Android is an open source platform to the third party smartphone vendors which is available for free of charge. But, Google expects to make profit from mobile advertisements and other services on Android devices. Samsung is the largest Android vendor, followed by HTC and other competitive brands including Sony, Huawei, Motorola, LG and ZTE. It’s clear that Apple and Google are more focused on meaningful user experiences based on its new software business models. IHS iSuppli has also estimated that Apple and Google (combined) will account for 76% of the market share in 2012.

I have already mentioned that there’s need to have a strong mobile ecosystem around to be successful in mobile OS segment. Apple and Google have already their App stores—Apple App Store and Google Play Store respectively. Definitely, users will prefer those platform which will have strong mobile ecosystem. Apparently, Microsoft is also gaining mobile OS market. Windows Phone and Windows Mobile combined accounted 3.5 % market share till the end of Q2 of this year and presently, Microsoft has more than 1,00,000 apps in its App store.