Home Brief The Death Of Symbian: A Biggest Mistake Nokia Ever Committed ! 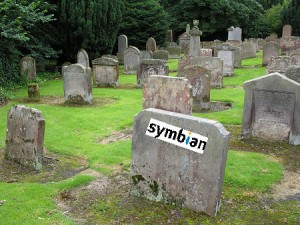 However, I have not unfamiliar with an intense competition around, but somehow Nokia’s monopoly made dearth in market share of the OS. First, the company gave up its own OS and adopted Windows Phone—an unproven OS. That time, the world embraced Android, as Samsung did, but Nokia’s new CEO Stephen Elop believed on Microsoft’s Windows Phone and his affection is still continued. Nokia’s biggest mistake was to announce the death of Symbian OS last year. Indeed, it was one of the strongest jostles for Nokia’s enthusiasts. The company believed that Nokia fanatics will switch to new Windows OS platform, but it was not so happened. On the contrary, the enthusiasts shifted to some other platform rather than Windows Phone.

How the declaration affected the company?

Once if the company announces, the death of Symbian, then one should clearly understand that the company is going to block the entrance gate for new comers. It’s the proverb, no one greets to sun set on the earth, that’s also true with Symbian OS. Why users would buy Symbian based device if the OS has no future? In the emerging markets, folks are still more relying on Symbian’s OS but not on Windows Phone. Company’s decision compelled them to move out form Symbian platform to some other, anyhow it has benefited Android to make its penetration in these markets.

Nokia treated its own OS like a step-child and didn’t rely on it. Company’s new CEO believed that the OS had became obsolete compare to Android and iOS. But, I have still a doubt that Why the company did not chose Android rather than Windows Phone? The reason is quite obvious that every second Smartphone is currently powered by Android worldwide.

However, I am not blind supporter of Symbian OS, and also I have no objection why the company went with Windows Phone. But the company should not had to declare “death of Symbian” in the last year. The announcement has forced a large number of users to switch from the platform to some other.