Must-Try Indie Games Of The Last Year : Those Loved And Anticipated By The Casual Gamers

In this era of innovation where different developers with the help of technology are striving hard to bring games closer to the reality, there are some developers who are keeping the indie games genre alive and kicking. There are different communities of casual gamers which give indie games more priority than the games integrated with advanced features like enhanced AI, mind-boggling graphics and gameplay difficult to handle. Though there aren’t much games in the indie genre but there are also some of them which have become the multi-million selling titles and giving the hardcore games a tough look. Games like Angry Birds,World Of Goo etc. are some of the most anticipated games of the last year and haven’t lost their charm yet. Here is a list of the last year’s top 3 indie games that were ultra-addictive and path breaking. 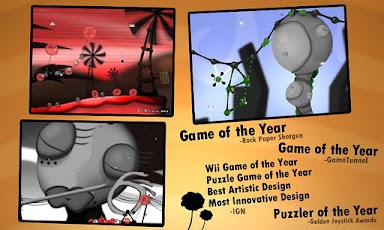 World Of Goo is the award-winning game from 2D Boy which has become one of the most anticipated game because of its addictive gameplay. This must-try indie game is real fun and addictive as there are plenty of seriously involving puzzles to solve out. The game consists of millions of curious goo balls which are to be drag-and-drop for making different stuffs ranging from bridges to the mysterious ‘Product Z’. The World of Goo multiple types of Goo ball which have their own unique abilities giving casual gamers the extra punch of fun and addiction.

“Drag and drop living, squirming, talking, globs of goo to build structures, bridges, cannonballs, zeppelins, and giant tongues. Mysterious Levels – Each level is strange and dangerously beautiful, introducing new puzzles, areas, and the creatures that live in them. World of Goo Balls – Along the way, undiscovered new species of Goo Ball, each with unique abilities, come together to ooze through reluctant tales of discovery, love, conspiracy, beauty, electric power, and the third dimension”.

Angry Birds is the another multi-million selling indie game title topping the charts. It is a slingshot featured puzzler from Rovio which highlights the plenty of pissed off birds having their own unique abilities. The story of the game starts with the prosperous world of sweet looking birds who turn into the annoyed and ferocious one when their little eggs are stolen by green clumsy pigs. The gamers have to launch these ready-to-die angry birds via a slingshot on the green pigs so as to clear the different puzzled levels. The game features physics-based levels with good graphics,humorous sound effects and addictive gameplay. The last game in our list is the Minecraft from the developers Mojang. Minecraft features sandbox-building game focused on players own imagination as they need to build different stuffs out of textured cubes in a unique 3D world. Gameplay consists of two main game modes,Survival and Creative,in former mode gamers have to maintain their health and hunger by acquiring the various available resources in the world whereas in the later mode players are free to use their imagination without worrying about the resources. The pocket edition of the game is also available for android platform to keep your imagination alive on the go.

“Imagine it, build it. Create worlds on the go with Minecraft”

“Minecraft Pocket edition allows you to build on the go. Use blocks to create masterpieces as you travel, hangout with friends, sit at the park, the possibilities are endless. Move beyond the limits of your computer and play Minecraft everywhere you go.”

What Is Wrong With Indie Game Developers In India?