Toshiba, a major electronics brand well-acclaimed for its innovations has released the world’s slimmest 10.1″ tablet namely Toshiba AT200 in UK via Carphone Warehouse. The latest addition from Toshiba is at the moment available for online purchase only. After 15 February, the tablet will be available at the Brick and Mortar stores too. Toshiba with its latest AT 200 tablet has given a big blow to the Samsung’s camp as Toshiba AT200 measures mere 7.7 mm thick and 535gm in weight, which makes it super portable than other 10.1″ tablets available worldwide in the tablet market. Toshiba is striving hard to acquire both smartphone and tablet market all around the world, though there were lot of announcements from Toshiba in the Tablet segment. The Toshiba AT200 is available in two variants,both are the Wi-Fi versions, which are 16 GB and 32 GB models,both are priced at £399 and £449 respectively. 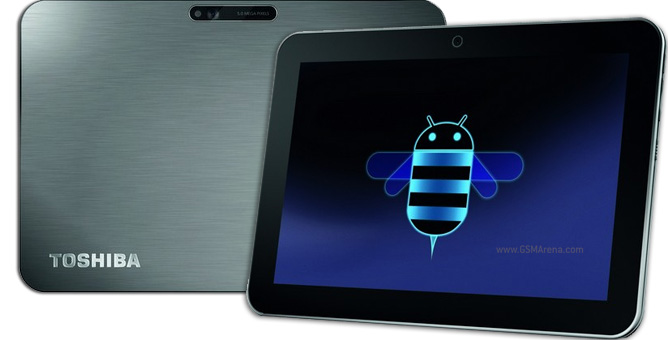 The Toshiba AT200 features 10.1″ LED-backlit LCD capacitive touchscreen with 1280×800 pixels resolution,capable of delivering astounding and vivid display for viewing various multimedia contents. It weighs merely 558 gms and is 7.7 mm thick, the dimension would have certainly raised the eye-brows of many. The Toshiba AT200 tablet is powered with 1.2 GHz Dual-Core Cortex A9 processor,1 GB RAM and PowerVR SGX 540 GPU. The specification is capable enough to run various latest applications and 3D games with ease. The tablet will really promote gaming because of its hardcore specification,the light weight dimensions and the advanced sensors like Accelerometer,Gyroscope,Compass etc. The latest tablet from Toshiba has a 5 MP camera with Auto-Focus,LED Flash and Geo-tagging. The camera is capable of video recording at 720p resolutions and is supported with a 2 MP front camera also. Presently, Toshiba AT200 is running on Android 3.2 Honeycomb OS but will soon get Android 4.0 Ice cream sandwich update. Features like HDMI out,WiFi 802.11 b/g/n, Bluetooth v2.1 with A2DP and EDR, are supported as usual.