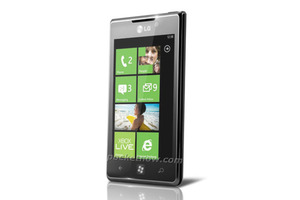 LG,a major mobile manufacturing company, is striving hard to get hold of the worldwide smartphone market. The company is about to announce one of their most anticipated smartphone empowered with latest Windows Mobile OS and which will be competing with companies like Samsung, HTC ,Motorola etc. in the segment. Though there is no official news from LG’s camp but fortunately a press shot of LG Miracle has emerged from nowhere giving sufficient clue about the latest development from LG. LG is considering various mobile segments and is very well developing the products for them.Recently,LG also released Prada 3 for the consumers who are more fashion oriented. LG Miracle is expected to get announced at MWC 2012 and may get released in April 2012.

With so many rumors all around, the specification of the smartphone cannot be confirmed yet but there are specs which are common to what all the technology websites are sharing. LG Miracle features WVGA Nova IPS TFT display with 800×420 pixels resolution, designed to deliver outstanding and vivid viewing experience to the consumers. LG Miracle will be the first Windows Mobile phone to feature the astounding Nova Display to compete with other brands and will surely raise the standard of super bright display in smartphone market. Despite of getting such a dazzling display, LG Miracle is powered with 1 GHz Scorpion processor supported by Qualcomm Snapdragon MSM8255 chipset, which is much inferior to the 1.5 GHz processors embedded in most of the second generation Windows phones. LG Miracle is bundled with a 5 MP camera with LED Flash and Auto-Focus. The camera is capable of HD video recording at 720p resolution and is supported by a front VGA camera too. Other features like 14.4Mbps HSPA, Wi-Fi a/b/g/n, Bluetooth 3.0 and obviously NFC is also supported. The pricing and availability of the LG Miracle is still not confirmed but its sure that LG will announce it soon.