Digital Extreme and 2K Games are bringing the sequel to the well acclaimed game title, The Darkness. The game was inspired by the popular comic series produced by Top Cow Productions and proved to be an intensive first person shooter action game that allowed players to be the host of darkness. Darkness 2 delivers astounding action with twisted and gripping storyline featuring tragedy, modern crime drama, and supernatural horror. Darkness 2,masterpiece from Digital Extreme puts you in the role of Jackie Estacado, don of a New York crime family and posses dark powers called The Darkness. The game intended to deliver action-packed FPS gaming experience is very well crafted with comic-style graphics, involving storyline and astounding gameplay. Unlike its predecessor, Darkness 2 features Quad-Wielding technique which allows gamers to control the Darkness and Artillery simultaneously. This latest sequel will deliver a whole new genre of FPS gaming as it allows gamers to slash, grab, throw objects and enemies with the Demon Arms while simultaneously firing two weapons. The game is available for Microsoft Windows,XBox 360 and Sony Playstation 3 gaming platforms. 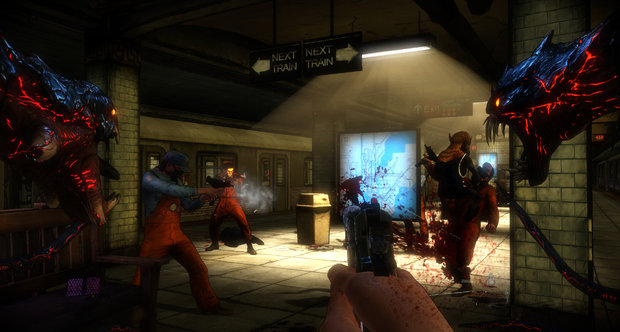 The Darkness II features an intense and very involving storyline, well knitted to deliver gamers a better gaming experience than its predecessor. The Darkness 2 starts two years after the whole plot of the first game title. Gamers have to play the role of Jackie Estacado, the current wielder of The Darkness,who successfully used his powers to be the unrivaled Don of the Franchetti crime family. He has been unable to escape the thoughts of his dead girlfriend Jenny Romano and has since, with the help of Johnny Powell contained his supernatural dark powers but now The Darkness “wants out in the worst way”. The storyline has a whole new twist when Jackie is hunted by the mysterious Victor Valente, from The Brotherhood clan, who deliberately wants The Darkness. Jackie’s dark powers emerge back and help him to find Victor Valente and his purpose.

“It’s been two years since Jackie used his power to kill the men responsible for his girlfriend’s murder. He’s been unable to shake the memory of Jenny’s death since bottling up The Darkness and now it wants out. A botched attempt on Jackie’s life opens the door for The Darkness to reemerge, and sets Jackie on a brutal and personal journey as he unravels the mystery behind the attack and the motives of The Darkness”