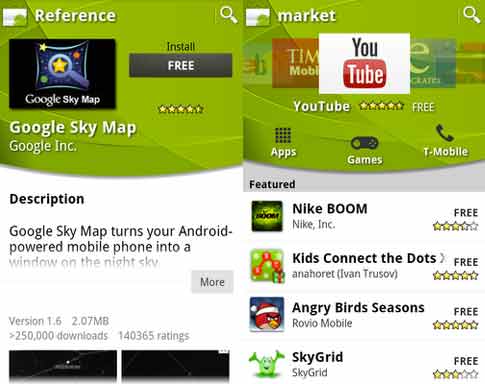 Google established its Google Play Store (formerly known as Android Market) in October 2008. The company had to wait several months to hit 1 billion app downloads which finally happened in July 2010. Exactly after a year, the number of Google Play Store app downloads surpassed 6 billion. However, with astounding growth in the last four months, Google has today seen the 10 billionth app download from Android Market. Surprisingly, with 1 billion apps downloaded each month, it’s impossible to predict the growth rate of Android apps in the next few years.

In the present scenario, a lineup of independent online app stores like Amazon, Barnes & Noble, is available in the market but seems primarily feeders. Currently, only two major online app stores, to speak off, are Google’s Android Market and Apple App Store. The main rival of the Android marketplace is only Apple Apps store which reached 10 billion downloads in January 2011 – exactly two and half years of launch in July 2008.

The director of Android Developer Ecosystem –Eric Chu—wrote in a post on Android Developer blog, “One billion is a pretty big number by any measurement. However, when it’s describing the speed at which something is growing, it’s simply amazing. This past weekend, thanks to Android users around the world, Android Market exceeded 10 billion app downloads – with a growth rate of one billion app downloads per month. We can’t wait to see where this accelerating growth takes us in 2012.”

Though the number of apps download is not important, the growth rate of apps downloaded in the last four months has really caught up everyone’s eye. The company took 21 months to reach 1 billion as depicted by the bar chart above but now 1 Billion app downloads have changed the culmination of the marketers. It needs the company to increase its effort to avail the apps online in order to fulfill the demand of the users which has reached 1 billion per month in numbers.

Really, it’s a time for a special celebration, that’s why the company has announced to offer a number of apps in Android Market for just 10 cents ($0.10) on Tuesday. The apps which are under celebration offers include Asphalt 6 HD, Color & Draw for Kids, Endomondo Sports Tracker Pro, Fieldrunners HD, Great Little War Game, Minecraft, Paper Camera, Sketchbook Mobile, Soundhound Infinity, and Swiftkey X.

It’s obviously a good time for the Android market because of the outstanding growth rate. The aggressiveness of the Android market would be tough to counter for rivals like Apple. Though Apple App Store reached the magic number of 10 billion way back this year, Android’s recent growth, in the last four months, has threatened every online apps stores like Amazon, Barnes & Noble.