Home Brief Girl Killed Herself on Halloween: Another Dirty Scam on Facebook 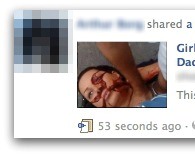 Scammers don’t miss any opportunity to spin the situation on Facebook. This time it is another dirty trick which claims to have video of a girl who killed herself on Halloween after her father posted a message on her wall. Interestingly, the video has gone viral over Facebook as many users are re-sharing the message with their friends without actually going through the details of the link.

However, while digging, we found it just another scam, like many previous ones, where scammers earn money from affiliates by trick the Facebook users for filling out some a survey. One user will click on the message to see the video, it will lead him to a ‘non-Facebook-page’ which claims to have Girl’s photo along with a brief message about the suicide. The message claims to be connected with a video of suicide but users are asked to share the link with their Facebook friends – before they actually see such video. But wait, what’s the fun for scammer in this – the affiliate survey which is getting attracting traffic from your act ad network and claims it a pass gate to view the video. Many of Facebook users, like me, always encourage such acts being as serious social networker. However, there are many who just use Facebook only to build their network and share such messages without actually measuring the potential risk.

So, if you among the one who got such message form any of your network friend, please delete it instantly without being fooled. Infact, even you have already shared such message naively, you can still scroll down little and delete the msg. This will also help – till an extent – to stop such illegitimate broadcast.